From shutdown to reopening in a year

U.S. equity markets extended their gains in the second quarter. The S&P 500 was up 8.5% and the Russell 2000 was up 4.3%, pushing one-year returns to 40.8% and 62.0%, respectively. The S&P 500 finished at a record high, its 19th of the quarter. Large cap value stocks underperformed growth stocks for the first time since the shift began in fourth-quarter 2020, but small cap value stocks still outperformed small cap growth.

Real Estate, Information Technology and Energy sectors saw the strongest U.S. sector returns, and Consumer Staples and Utilities were the weakest. Market volatility as measured by the CBOE Volatility Index declined to prepandemic levels. International markets, while positive in the second quarter, continue to lag U.S. markets year to date.

The COVID-19 U.S. economic narrative shifted from shutdown to reopening, with 54.6% of the U.S. population receiving at least one dose of the vaccine by June 30. The current efficacy of the vaccine and potential protection from variants should continue to help fuel the reopening trade in the developed markets into the second half of the year.

While the economic outlook has changed considerably in the past year, the next few months should provide more insight into inflation, fiscal and monetary support and the pandemic. We anticipate that the inflation spike is mostly transitory given the year-over-year base effects from the pandemic, but market participants will likely remain focused on these data points. The Federal Reserve will hold its annual Jackson Hole policy symposium at the end of August, a setting that historically has been used to signal policy changes. The Fed may provide a roadmap as to when it will start tapering asset purchases implemented during the pandemic to stabilize the economy from the COVID-19 economic shutdowns, be more definitive around inflation and comment on the substantial progress of the employment situation.

President Biden reached an agreement in late June with a group of bipartisan senators for an infrastructure plan that would cost $1.2 trillion over eight years. Efforts to convert this proposal into legislation may take center stage in the third quarter. The ability of the market to maintain strong earnings reports will be of particular importance given broader optimism and valuations. While COVID-19 vaccines have become more widely available across the U.S., the potential rise in Delta variant cases should be monitored as a precaution since additional outbreaks could result in a slowdown to the broader U.S. reopening. 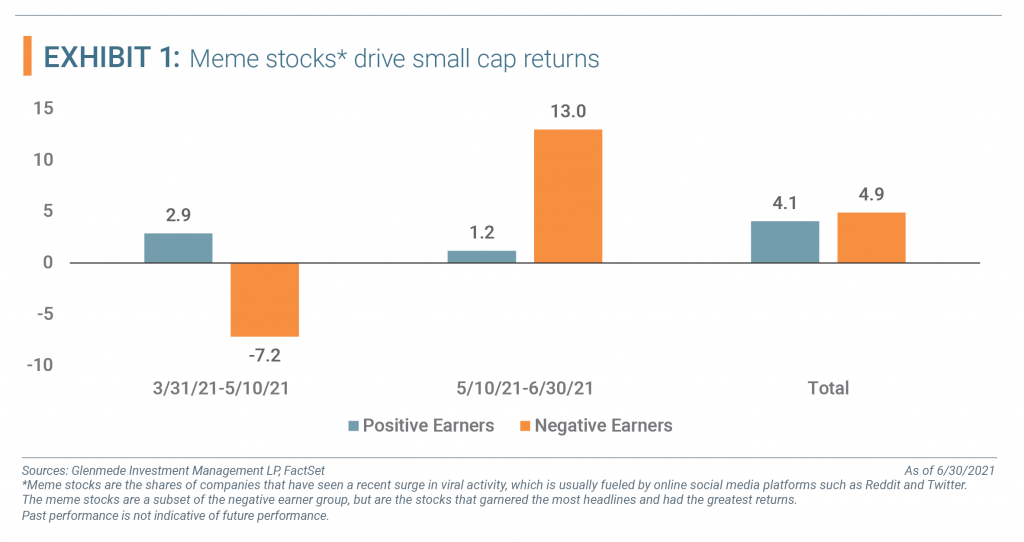 The small cap Russell 2000 index returned 4.3% for the second quarter. On the surface, this would appear to have been a relatively benign quarter, but that does not tell the full story. In our opinion, the quarter was marked by two different performance regimes based on earnings quality:

Investor optimism regarding a resurgent economic recovery led small caps to significantly outperform their large cap brethren coming out of the depths of the COVID-19 shutdown roughly a year ago. Investors appear to have become less confident in the resilience of the economic recovery following Fed commentary that suggested interest rate increases may be closer than anticipated. Fears that a Fed policy mistake could prematurely end the recovery led some investors to favor many of the same trades that were winners in the recent past. In particular, a bid for lower-quality and growth-oriented companies enjoyed significant outperformance within small caps. It is possible, however, that this trade could prove to be short-lived if the fundamental underpinnings for earnings growth prove stronger than expected, causing a rotation back to higher-quality issues with more attractive valuation profiles. Historical precedent would suggest that investor attention will shift elsewhere in the coming quarters, and the meme stocks could have a period of challenging returns. 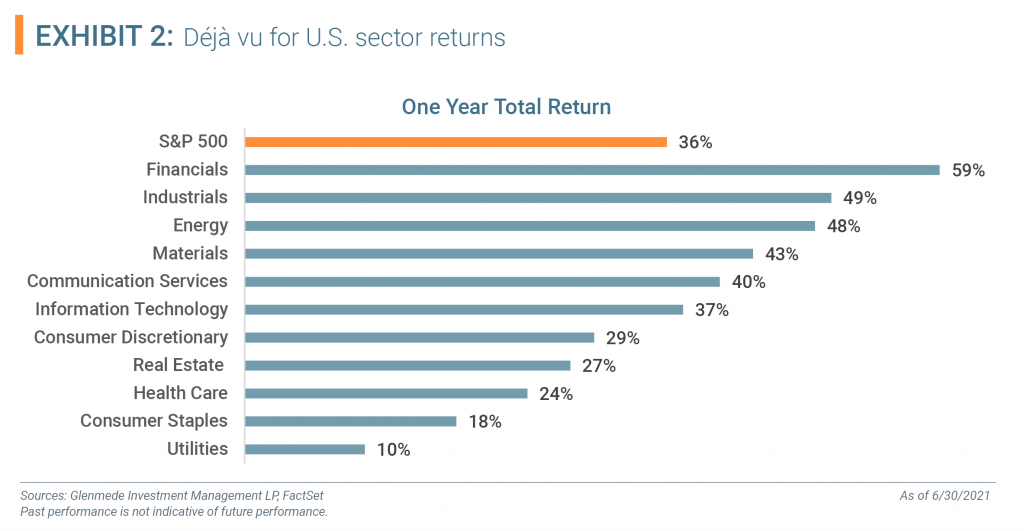 The speed of both the downturn and the recovery from the economic effects of the pandemic has been unusual. But in other respects, the market has reacted in a manner consistent with previous business cycles. Sectors initially heavily impacted by the economic shutdowns, but helped by the significant fiscal and monetary stimulus, staged strong recoveries and led the market over the last 12 months — Financials, Industrials, Energy and Materials among them. More economically defensive, less-impacted sectors such as Utilities and Consumer Staples have lagged. Some of this continued during the second quarter, with Energy and Real Estate (a latecomer to the recovery trade) among the top performing sectors, and Utilities and Consumer Staples trailing the market. However, the recovery in some sectors began to lose momentum and the market rotated back toward the growth leadership from earlier in the pandemic, with many technology and internet companies doing well.

Corporate earnings have already recovered in aggregate — much faster than in a typical business cycle — despite businesses with activity that remains well below prepandemic levels. In the past six months, sell-side analysts have raised corporate earnings for 2021 and 2022, expecting S&P 500 earnings for 2021 to grow 36% versus 23% six months ago. Given the continued easing in activity restrictions in the U.S., the earnings outlook appears supportive for a broad range of businesses (and stock returns) over at least the next several quarters. An early expansionary phase of an economic cycle, like what we’re currently experiencing, is typically accommodative to breadth in stock performance. New virus variants could result in renewed activity restrictions and pose a risk to this outlook — and the virus certainly remains a unique aspect that could frustrate comparisons to “typical” cycles — but it does not appear that conditions are in place that would cut this cycle short. 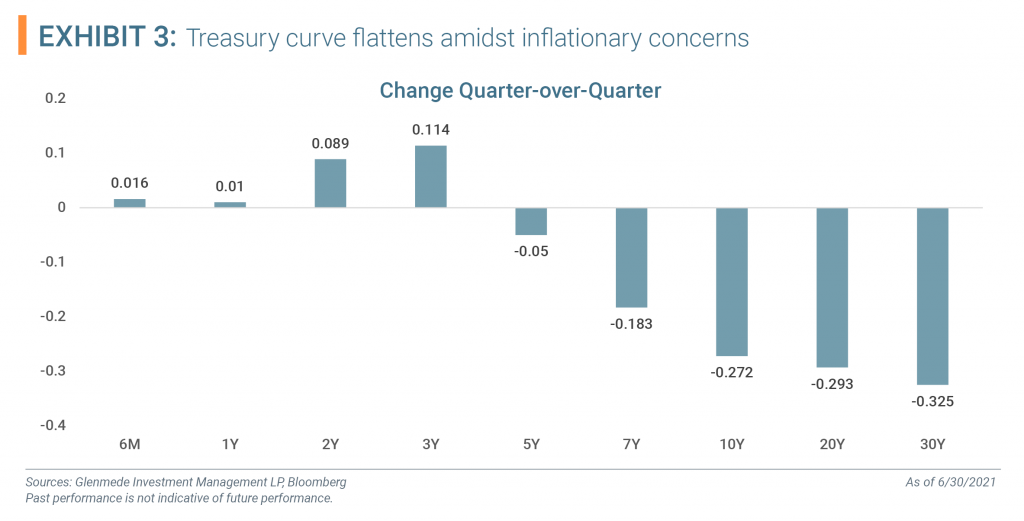 Following the Fed’s commentary about recognizing inflationary pressures along with its more hawkish tone on rate increases, the U.S. Treasury curve flattened during the quarter and the U.S. Treasury 10-year yield fell 29 bps to 1.45%, as noted in Exhibit 3. Inflationary pressures cited by the Fed included the Consumer Price Index and Personal Consumption Expenditures Price Index surprising to the upside. These surprises were driven by several factors, including low year-over-year base effects spurred by last year’s pandemic, labor shortages, supply constraints and raw material prices. In anticipation of higher inflation data, the Fed had previously indicated a higher inflation target based on an average, rather than a maximum, inflation rate of 2%. The market continues to debate whether these inflation numbers will prove transitory, as we believe.

While we may not yet have seen the lows in U.S. Treasury yields, we believe the trajectory of rates will ultimately be higher this year given the inflation and growth narrative, along with the potential Fed tapering. However, monetary policy continues to be supportive of owning risk, and the attractiveness of the cross-currency bias for European and Japanese investors will likely create a ceiling for U.S. Treasury yields.

Submitted by the Fixed Income Team

Second-quarter 2021 saw a respite in the value-over-growth trade that started in fourth-quarter 2020. In June alone, the Russell 1000 Growth Index outperformed the Russell 1000 Value Index by an absolute difference of 7.4%, the largest monthly outperformance in over 20 years. The decline in longer-term interest rates previously referenced served as a catalyst for growth stocks during the quarter. The five largest stocks in the Russell 1000 Index (Apple +12%, Microsoft Corp. +15%, Amazon +11%, Facebook +19% and Alphabet +22%) accounted for about 32% (274 bps) of the index’s performance. This dynamic is at odds with the recent inflation surprises we have seen and the historical relationship between inflation and technology stocks, but supportive of the transitory narrative for inflation. Since the inception of the Russell 1000 in 1979, technology stocks have outperformed by 11.0% in periods of sub-2% inflation but underperformed the index by 5.6% per year when inflation was over 3.5%. Year-over-year inflation as of July 13 sits at 5.4%. With tech disproportionately reflected in the Russell 1000 Growth Index (44.1% weight versus just 10.2% in the Russell 1000 Value as of June 30), this dynamic could weigh on index returns should inflation continue to surprise and persist.

Expectations for real U.S. GDP growth are 5-8% for 2021 and 3-6% for 2022 and sell-side analysts have raised estimates, as noted previously. The strong growth has been accompanied by a spike in inflation. While economic reopening is anticipated to boost corporate earnings, all eyes remain on inflation, yields and their anticipated impact on equities. Historically, since 1946, when inflation was between 4% and 6%, lower-valuation stocks have outperformed, with the cheapest quintile of stocks on a price/book basis outperforming the most expensive quintile by 6.1% per year, on average. Although the 10-year Treasury yield declined about 0.3% in the second quarter, which favored higher-valuation stocks, we expect economic growth and rising inflation to push 10-year Treasury yields higher in 2022, potentially re-favoring lower-valuation stocks.

Submitted by the Quantitative Equity Team

All data is as of 6/30/2021 unless otherwise noted. Opinions represent those of Glenmede Investment Management LP (GIM) as of the date of this report and are for general informational purposes only. This document is intended for sophisticated, institutional investors only and is not intended to predict or guarantee the future performance of any individual security, market sector or the markets generally. GIM’s opinions may change at any time without notice to you.