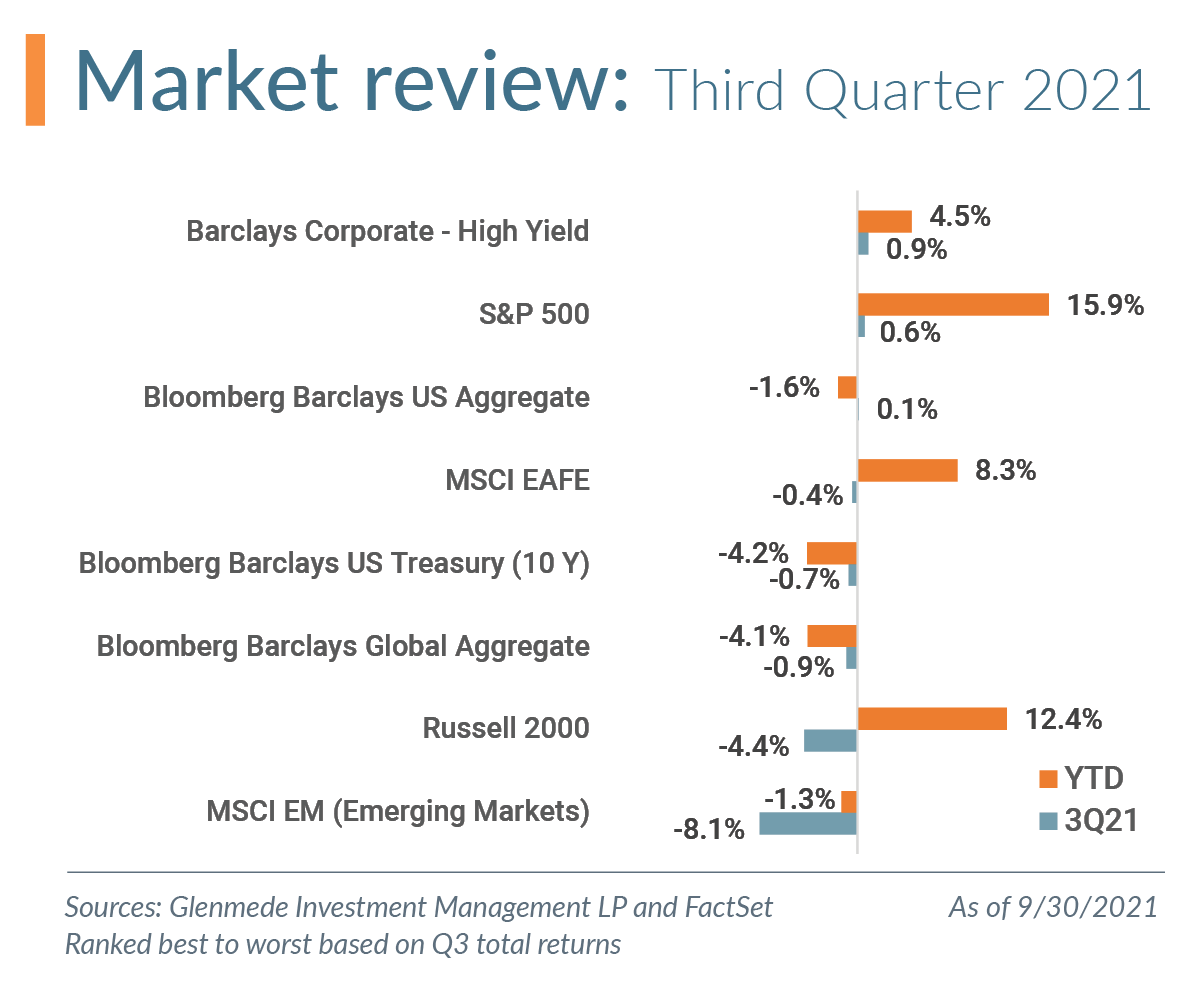 The Shifting Sands of Sentiment 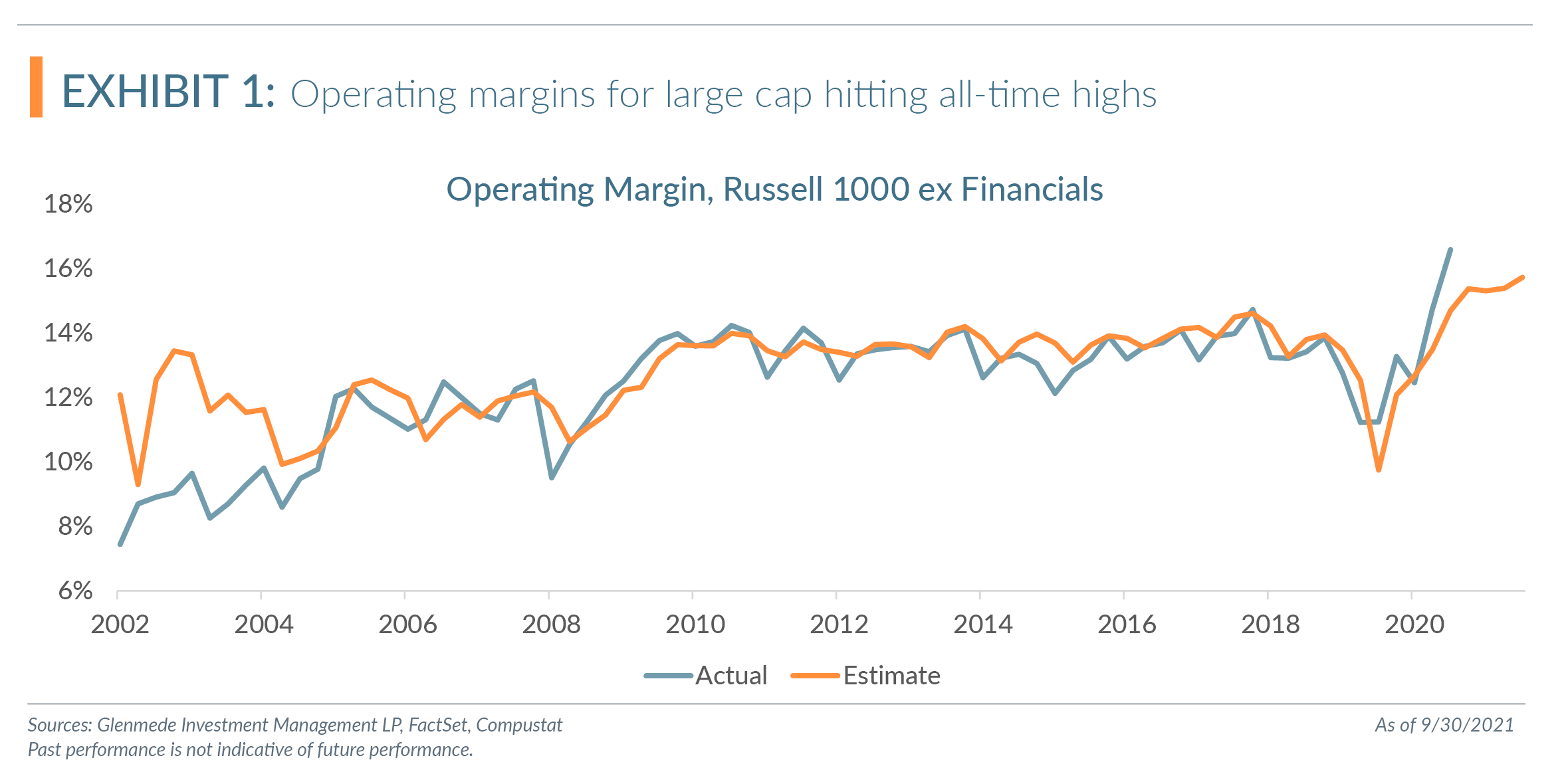 While much of the third quarter had a more optimistic tone with the focus on accommodative monetary policy, continued reopenings and strong earnings, September experienced a sentiment shift as concerns of peak growth, peak accommodative policy and peak earnings took center stage. Negative headlines out of China related to regulations on the technology sector and concerns about a potential default from Evergrande, a large Chinese property developer, also weighed on markets in the quarter.

The Federal Reserve (Fed) indicated during its September meeting that measured tapering could be prudent this year, setting the stage for a formal announcement in November. The shift in Federal Open Market Committee (FOMC) expectations of the timing and pace of future rate rises resulted in a jump in U.S. Treasury yields in the last week of the quarter, pressuring growth stocks that have benefited from declining yields. Congress was less clear on its policy as a potential government shutdown was narrowly avoided, but uncertainty on the debt ceiling and discord among the Democratic party surrounding the infrastructure bill resulted in increased headline risk and market volatility. The impact of COVID-19 was still felt in the quarter as the spread of the Delta variant and its effects on the reopening trade and the efficacy of the vaccine pressured investor optimism on the return-to-normal environment. While Q3 earnings reports are expected to be strong, concerns about supply chain and input prices escalated as some companies warned about the uncertainty and variability these issues present for earnings and guidance.

After a broad sell-off in September erased much of the quarter’s initial gains, the S&P 500 index was the only one of the major indexes to finish in the black, with 58 basis points of returns, bringing the year-to-date total return to 15.9%. The Russell 2000 index saw its first quarterly drawdown in six quarters, with a 4.4% pullback. International markets finished lower with China weighing on emerging markets. Large cap growth outperformed value during the quarter but gave up much of the initial outperformance in September. Financials was the best performing U.S. sector, while Industrials was the weakest.

The U.S. debt ceiling remains an event in Q4 2021, although potentially more muted than expectations at quarter end with the expected passage of a short-term debt limit extension to December 3. Treasury Secretary Janet Yellen had warned that the “extraordinary measures” implemented at the expiration of the suspension of the debt ceiling in July would be exhausted by October 18, and the U.S. could default on its debt without Congress passing an increase to the debt ceiling or an extension of the suspension. While history would suggest default is unlikely, the grandstanding and “down to the wire” tactics could add headline-risk volatility at some point this quarter if the issue is not resolved. Additional drivers for Q4 2021 will be much of what pushed the market volatility in September — COVID-19 infections and hospitalizations, the Fed narrative, earnings expectations and guidance and Congress’s ability to work together to pass an infrastructure bill.

Second-quarter earnings reports showed better-than-expected results, with a multidecade high 87% of S&P 500 companies reporting a positive earnings surprise relative to consensus estimates. The speed of the recovery we noted last quarter helped drive stronger-than-anticipated revenues for a broad array of businesses. Revenues exceeded estimates for 88% of companies, and all 24 industry groups tracked showed at least two-thirds of their constituents doing so. The earnings upside was additionally fueled by expanding margins, with operating margins for large cap non-financials hitting all-time highs at over 16%. Despite a late-quarter pullback, the reported earnings momentum helped the S&P 500 continue to edge higher even with stocks starting the period at historically high valuation levels.

With expectations for future earnings headed higher once again, how long could they continue to positively surprise analysts and investors? Margins are likely to play a key role in the outcome. We expect more volatility in upcoming quarters, as sharp moves in commodity prices and increased disruptions in supply chains will likely make it difficult for many companies to navigate easily in the short run. However, if underlying demand remains healthy and businesses still lag in their recovery catch-up (e.g., travel related), revenue performance should remain solid and many companies should be able to eventually pass along some of the higher costs they are experiencing. While higher costs alone would pressure margins, growing revenues usually can absorb those costs. Historically, rising cost pressure tends to become an issue for the market as a whole when aggregate demand falls (i.e., a recession). At the company level, we expect to see some added dispersion in results as demand fluctuates across businesses and both cost pressures and supply chain disruptions occur unevenly. But the current expectation for margins to remain high into next year does not require as large a leap of faith as might be implied when someone mentions peak levels. 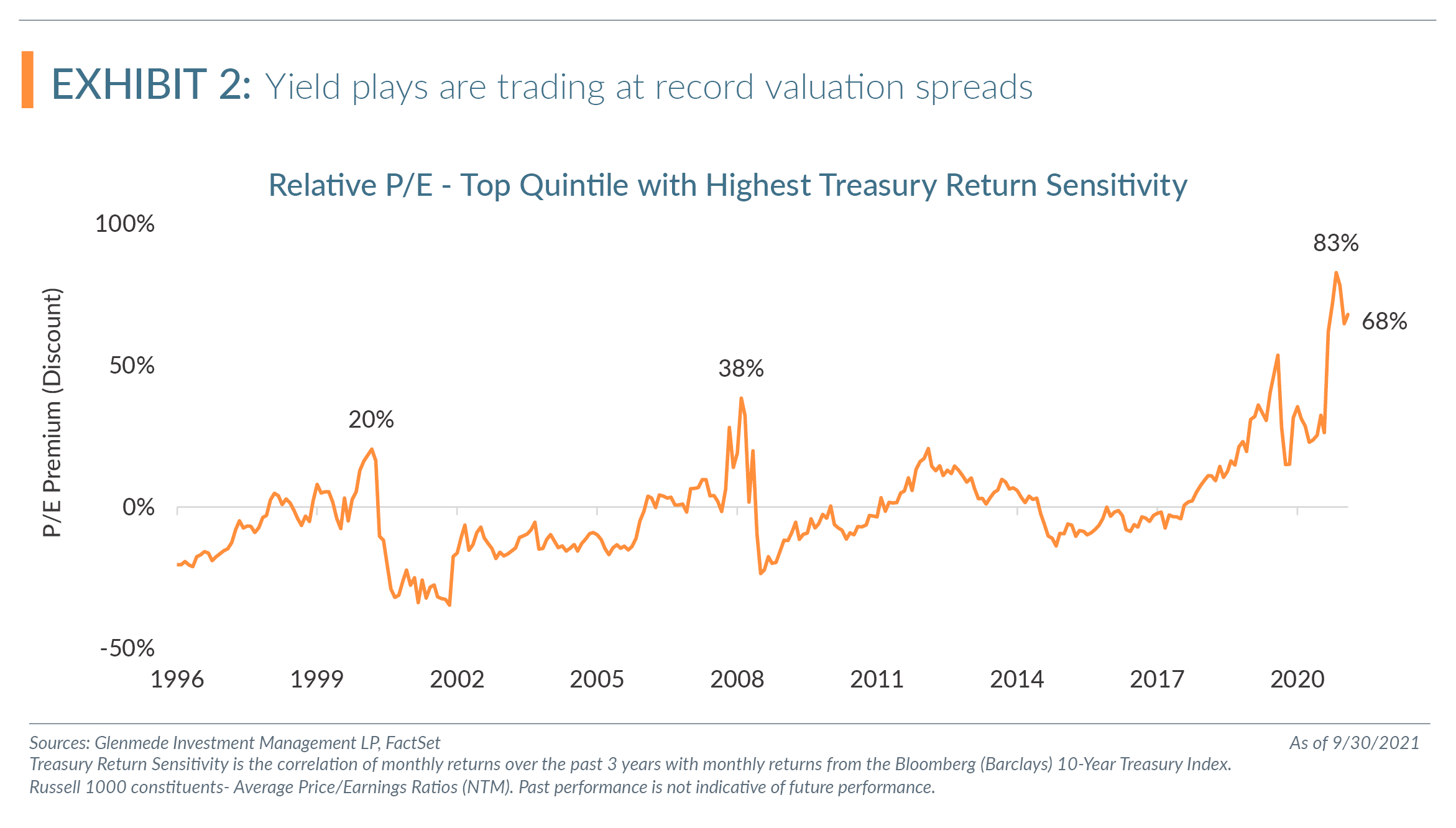 In Q1 2021, we noted that rising yields were beginning to weigh on growth stocks. However, since yields peaked in late March, we have seen growth stocks bounce back, as the Russell 1000 Growth index outperformed the Russell 1000 Value index by 8.8% in the second and third quarters. In the latest signs that these bets are converging, stocks with the highest correlation to the U.S. 10-year Treasury index are now trading at a 68% premium to the average large cap stock after trading near parity since 1996. The current spread is significantly higher than the peak in the internet bubble (20% in October 2000) and in the financial crisis (38% in September 2008). Moreover, the basket of names most sensitive to Treasury returns comprise 25.0% technology stocks versus an average of only 7.3% since 1996. The only time there was a similar composition was during the internet bubble, which saw a peak of roughly 31.8% technology stocks in October 2000.

This blowout of valuations coupled with increasing correlation to Treasuries indicates investors may be viewing highly speculative stocks with high P/E ratios as safe havens, bond proxies or TINA (there is no alternative). In addition to interest rate sensitivity, these speculative stocks actually reflect higher price volatility than the overall market, which is unusual. Since 1996, Treasury-sensitive stocks have been about 15.5% less volatile than the average stock; the only other period where they exhibited more volatility was between July and October 2000. Investors, therefore, seem to be drawn by the perception of safety rather than by reality. Given the evolving timeline of the Fed’s definition of transitory inflation, investors in these Treasury-sensitive names could get hit by increasing yields if inflation runs too hot. While current analysts’ expectations for broader stock market earnings remain strong and the U.S. economy is well into its economic recovery from the COVID-19 pandemic, a shift in sentiment or a perceived increased risk of a recession would likely also pressure these Treasury-sensitive stocks more dramatically given their increased equity volatility.

Submitted by the Quantitative Equity Team 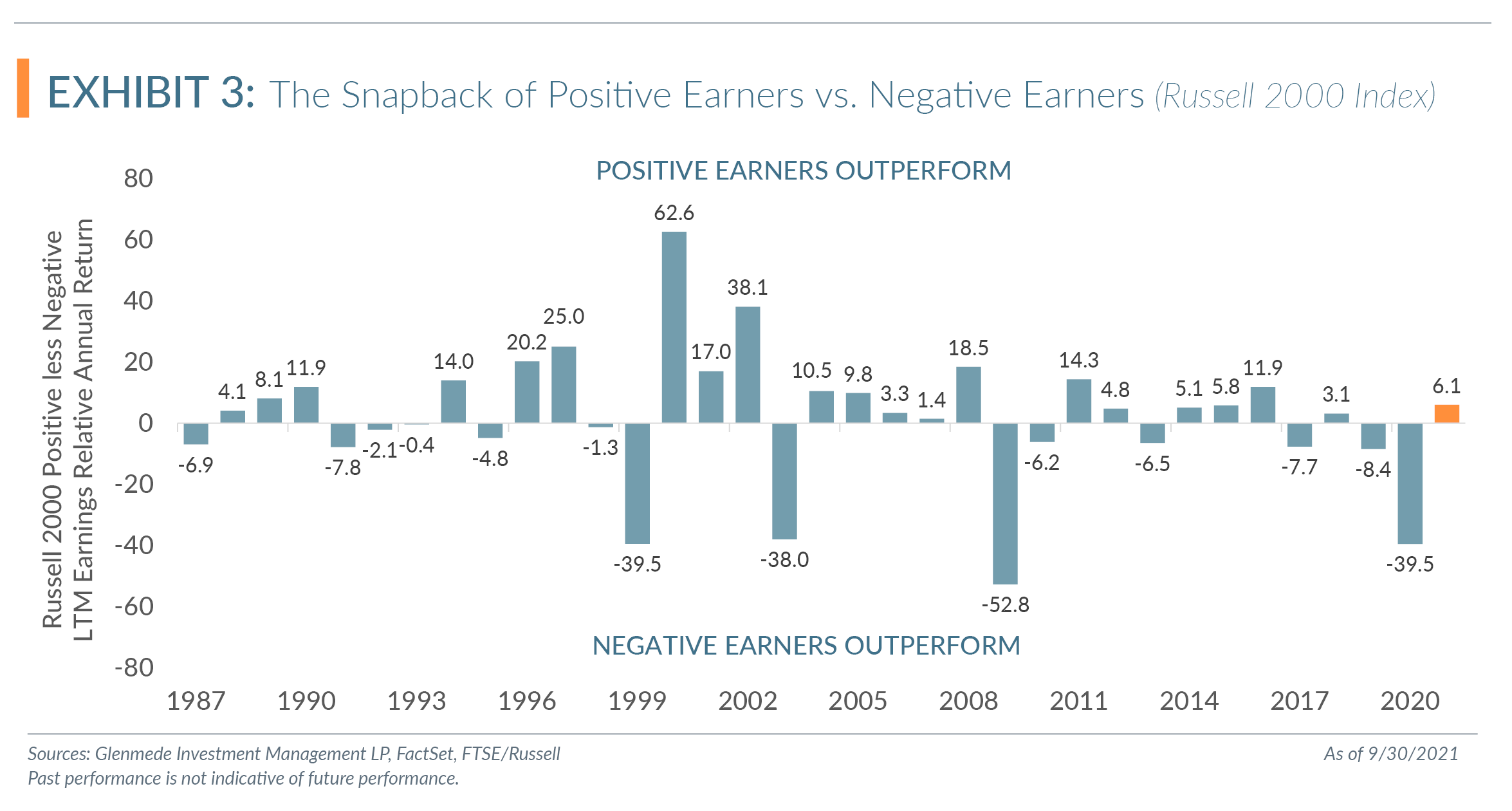 Should the past performance relationship prove to be a prologue for the future, investors would be well served to consider the makeup of their small cap allocation. A benchmark, or strategy, with a sizeable allocation to negative-earning companies may find it difficult to achieve superior results as profitable higher quality companies demonstrate better financial metrics throughout the economic cycle. As can be seen in the chart above, periods in which negative earners have substantially outperformed are typically followed by a sharp reversal of fortune in which positive earners lead.

The rate market moved moderately higher this quarter but is not punitive to risk markets, in our view. The situation may be changing. As indicated with the September FOMC post-meeting statement, the Fed will likely begin tapering this year, possibly as early as November, with the thought that asset purchases may finally come to end by mid-year 2022. The market had seemed to accept that the start of tapering did not imply rate rises were imminent prior to the September meeting; however, the pace of the rate increases signaled by the Fed was more aggressive than market expectations, leading to an increase in yields in the last week of the third quarter. The blurring of timelines between “transitory” inflation versus “traditional” inflation added uncertainty to the rate market. When looking at the summary of economic projections (SEP) from June to September 1, as noted in the chart above, the Fed is starting to acknowledge that inflation may not be fully transitory, which should be supportive of tapering and higher rates.

We believe the economic and growth outlook for the U.S. economy is firm. The U.S. has met the “substantial progress” narrative of the Fed with an ever-improving employment backdrop and a level of inflation above the 2% target. We believe inflation will be more durable, showing that not all the components are transitory and potentially settling in above the Fed’s 2% target. Over the next year, we believe rates should continue to migrate higher to a level in line with the better growth profile and higher inflation. However, even with credit spread levels resulting in a historically low compensation for risk, we believe buying demand will also remain robust given the dearth of available yield globally, likely keeping a ceiling on the level of rates as well. While the pushing of yields higher due to inflation versus the pulling of yields lower due to demand will likely be a continued dynamic, we anticipate being opportunistic in the periods of risk-off as we believe the longer term trend will remain risk-on.

Submitted by the Fixed Income Team

All data is as of 9/30/2021 unless otherwise noted. Opinions represent those of Glenmede Investment Management LP (GIM) as of the date of this report and are for general informational purposes only. This document is intended for sophisticated, institutional investors only and is not intended to predict or guarantee the future performance of any individual security, market sector or the markets generally. GIM’s opinions may change at any time without notice to you.