The rapid equity market rebound following the historic drawdown in March 2020 has been anything but expected. Investors have continued to support mega-cap growth stocks which appear to be significantly overvalued by a number of different measures. Investor preference for these largest cap companies continues a momentum cycle that has surged since 2018. Market activity has been driven by a combination of factors ranging from the interest in indexing to optimistic outlooks for technology and internet related stocks. With multiple indicators signaling significant risk based on historical trends, investors would be prudent to prepare for a market correction and shift to a more valuation-based assessment of the currently in-favor growth stocks. Our analysis reviews the ever-increasing market concentration and potential for a cyclical shift that would reduce the dominance of today’s market leaders.1

Today’s Context: A Market of Extremes

Any assessment of market conditions must start with a clear view of current trends set in the context of historical patterns. Today, the most-followed equity indexes have become increasingly concentrated, with just a handful of companies driving performance. Technology and internet-related companies (including Amazon) now represent 38 percent of the S&P 500 index, as shown in Exhibit 1, which charts the weights of these stocks (as illustrated by the orange line), as they were tracked before the GICS reclassification in 2018. 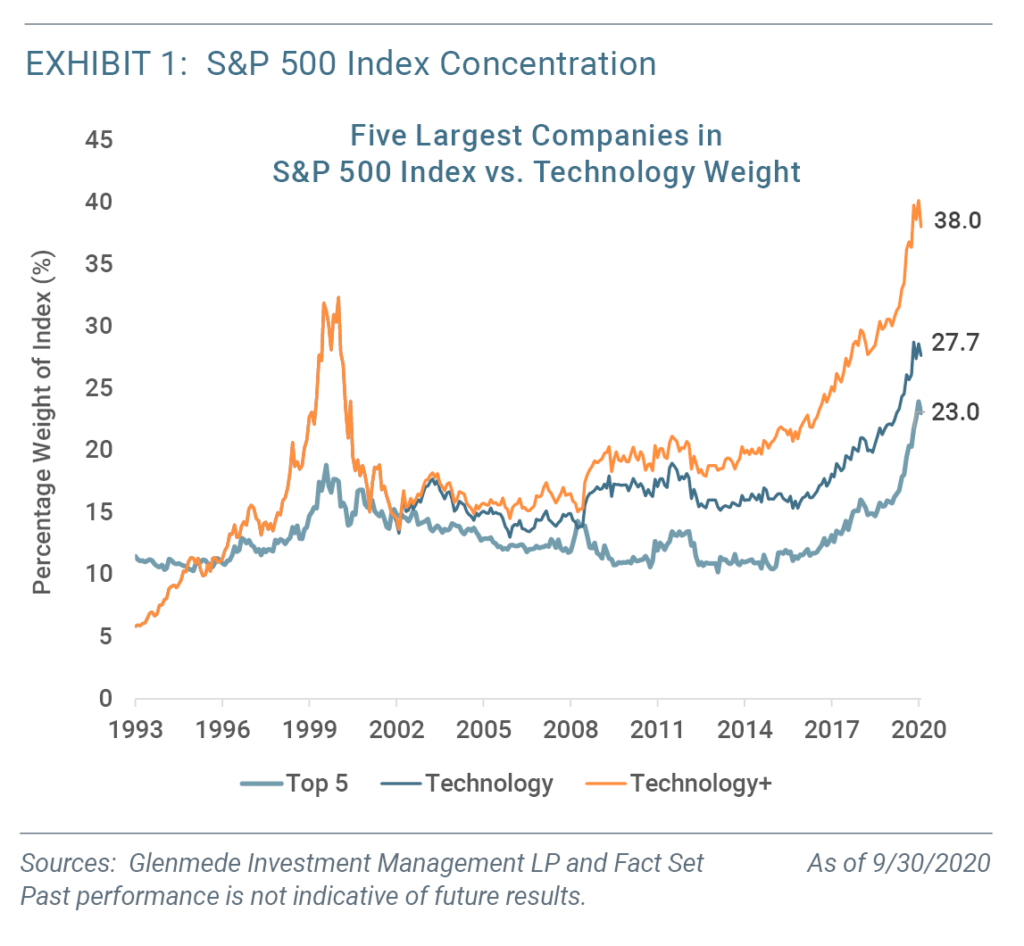 The concentration shown in Exhibit 1 is more pronounced than the similar pattern experienced in late 1999 and early 2000, when a set of the largest companies had driven up indexes ahead of a decline that began in March 2000 through 2002.

In fact, since 2018, just five companies in this concentrated environment have accounted for approximately half of the performance for the S&P 500, Russell 1000 and Russell 1000 Growth indexes, as shown in Exhibit 2. 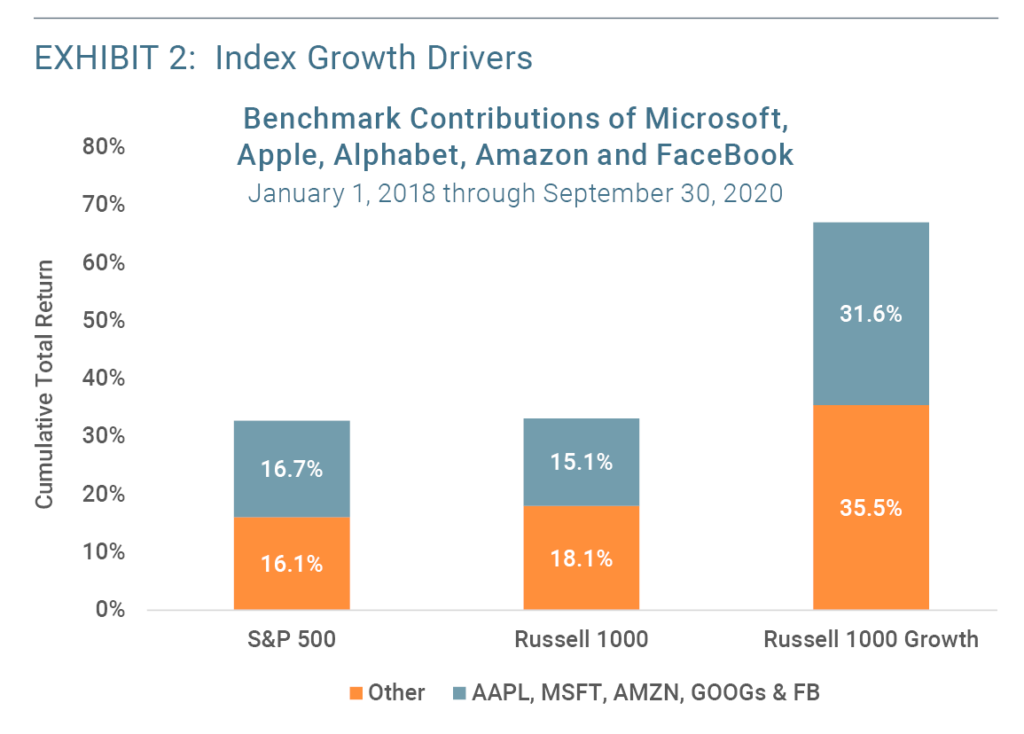 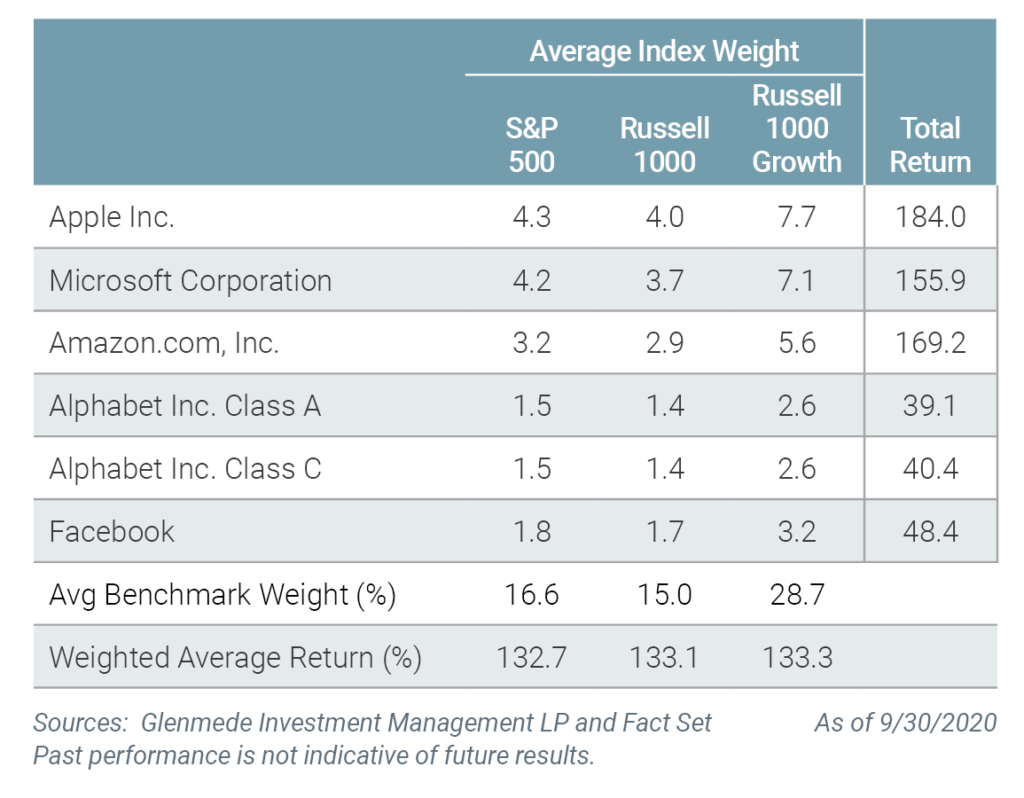 The runaway performance of a handful of growth stocks driving the indexes is in large part a result of the common index methodology of weighting stocks by market capitalization. The cap- weighted indexes constructed in this way have a price momentum bias. As a stock price climbs higher, the stock receives a greater weight in the index. Conversely, as a stock declines in value, its relative weight in the index becomes lower. Investors must be aware of the resulting concentration risk when constructing their portfolios.

With these growth stocks dominating, the market also has experienced extremes in the differences between equity style returns. Exhibit 3 shows the wide dispersion between growth and value styles. Total returns for stocks only in the Russell Top 200 Growth Index exceeded those that were only in the Russell Top 200 Value Index by approximately 61 percent for the 12 months ending September 30, 2020. This outperformance was even higher than the nearly 34 percent gap between large growth and large value stocks in 1999 during the peak of the internet bubble. 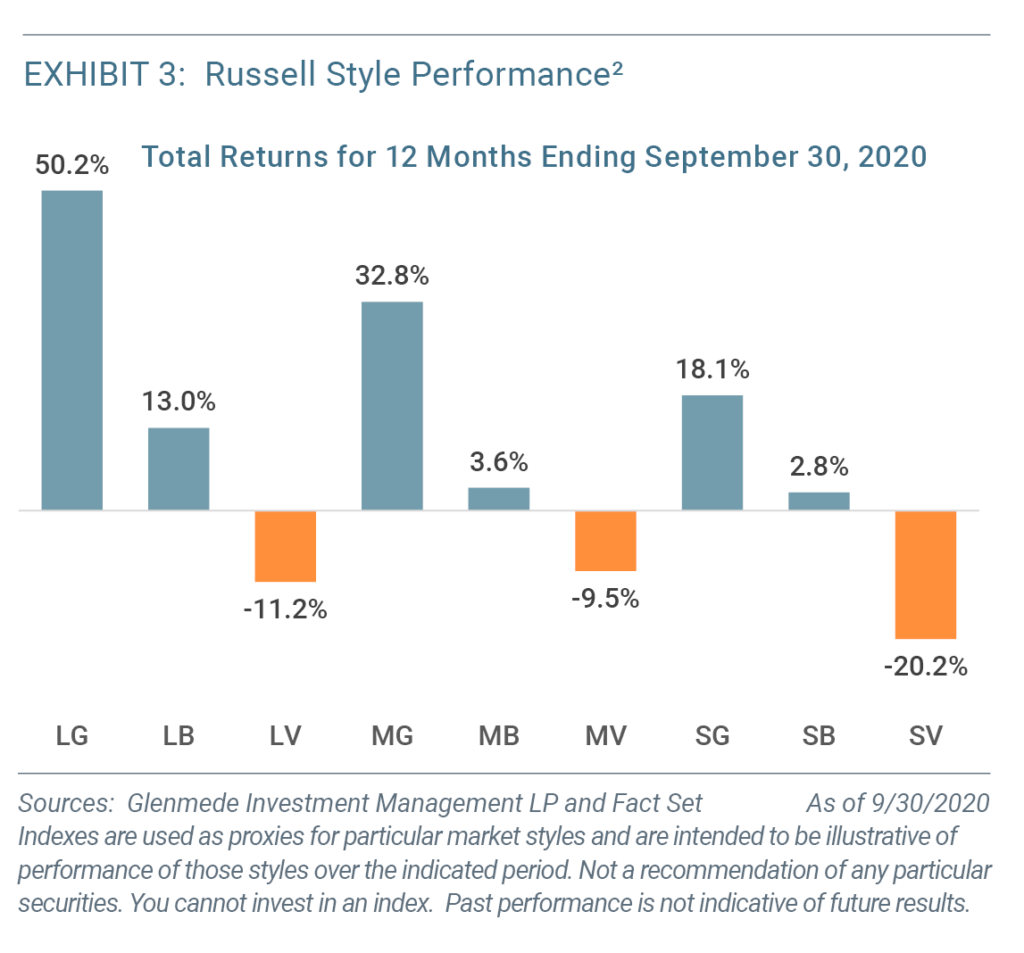 Even among growth stocks of different sizes, there are significant gaps between performance results. Stocks only in the Russell Mid Cap Growth Index and Russell 2000 Growth Index both delivered healthy total returns of 32.8 percent and 18.1 percent, respectively. However, those results were far less than the performance for the large cap growth stocks. While this disparity may provide an opportunity for active managers, investors need to be prepared for the risk that this measure signals.

A number of drivers are behind the differences in return for the largest cap growth and value stocks. In particular, investor “herding” behavior has become pronounced. The price movements during the 9-month period ending September 30, 2020 of the MAGNA stocks (Microsoft, Apple, Alphabet, Netflix and Amazon) are highly correlated at about 0.7, which is significantly above the 0.4 correlation for the average stock within the S&P 500.

The concentration and ever-increasing climb in mega-cap growth stock prices is not supported by rational valuation measures. Investors favoring these largest growth stocks must have extremely optimistic future expectations during the current health and economic crises. This ongoing trend should concern investors, especially those who have flocked to these equities recently.

A review of fundamentals for the five mega caps making up approximately 23 percent of the S&P 500 Index’s total market value does not provide a basis for recent pricing. These five stocks represent about 5 percent of the employees, 8 percent of revenues, 14 percent of free cash flows and 19 percent of earnings, as shown in Exhibit 4. 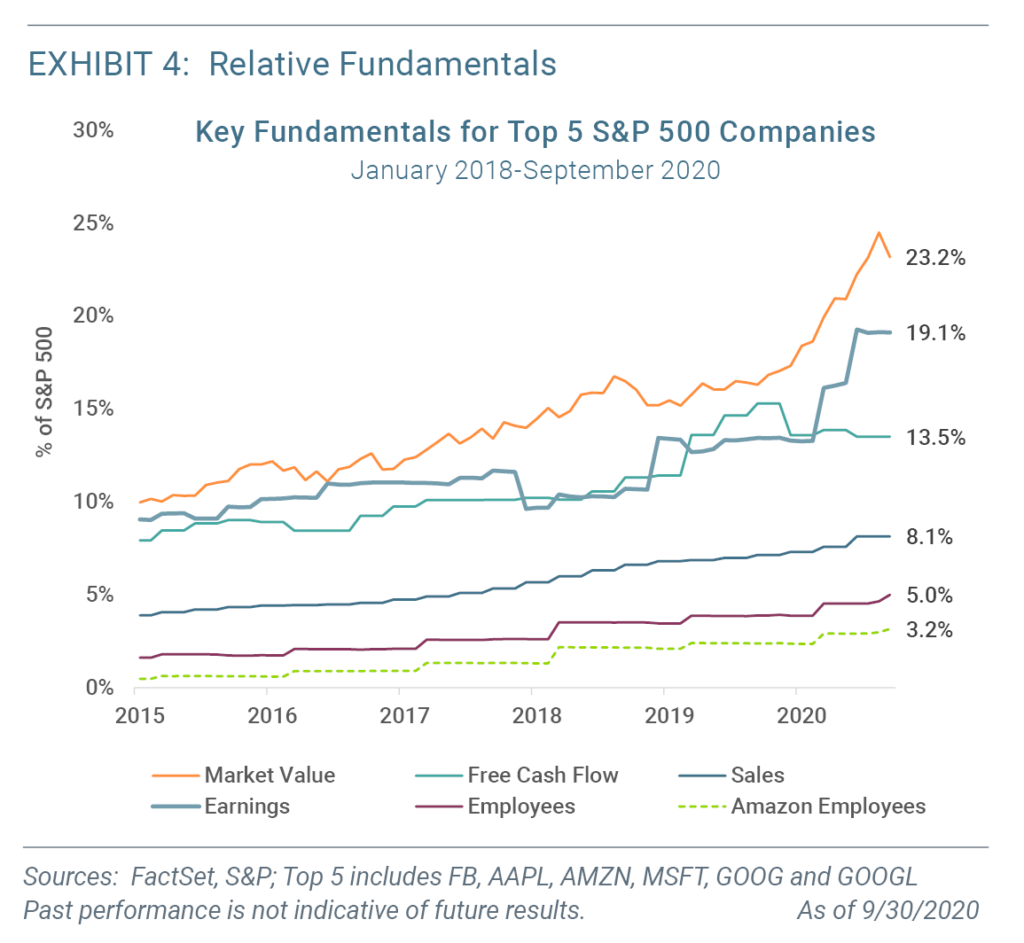 The same is true for the valuation premium in the five largest stocks in the Russell 1000. This group of companies trades at a 48 percent premium relative to the index based on forward price/earnings ratios. The price/sales ratio of 7.5 for these stocks is about triple that same measure for the overall index.

Additionally, we see significant gaps in valuation measures when comparing equal- and cap-weighted constructions of the Russell 1000 Index. Exhibit 5 shows that as of September 30, 2020, the Russell 1000 Index was near its widest premium in the last 10 years relative to an equal-weighted set of stocks using valuation measures such as price/book, price/sales, forward price/earnings and dividend yield. In fact, the index was at the 90th+ percentiles for four valuation measures looking back to 1993. This analysis provides insights into the inflated prices in the market cap weighted indexes. 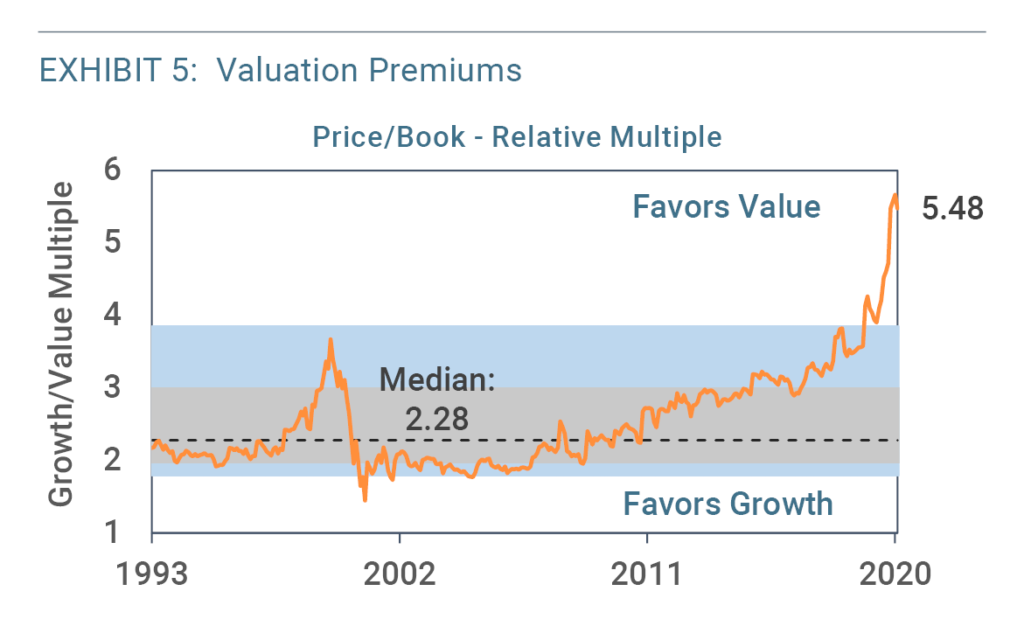 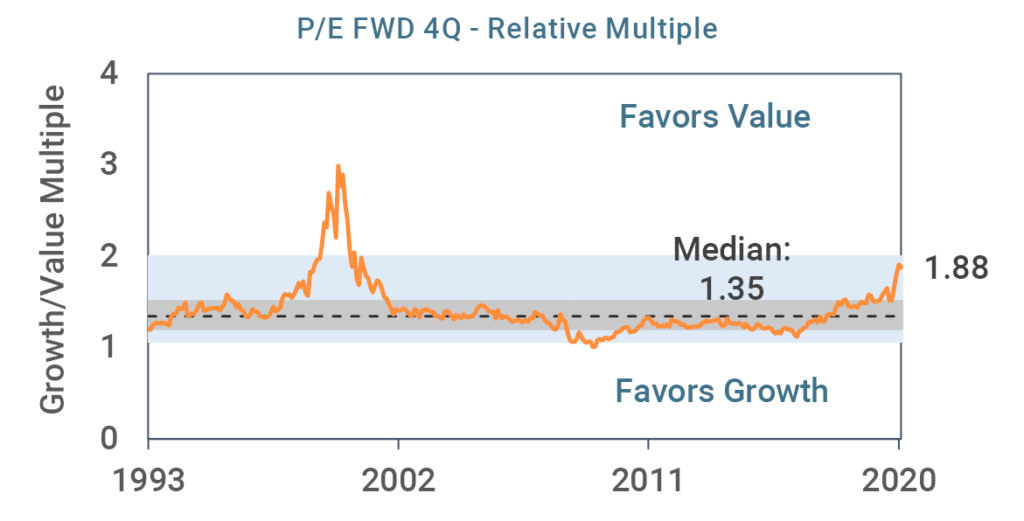 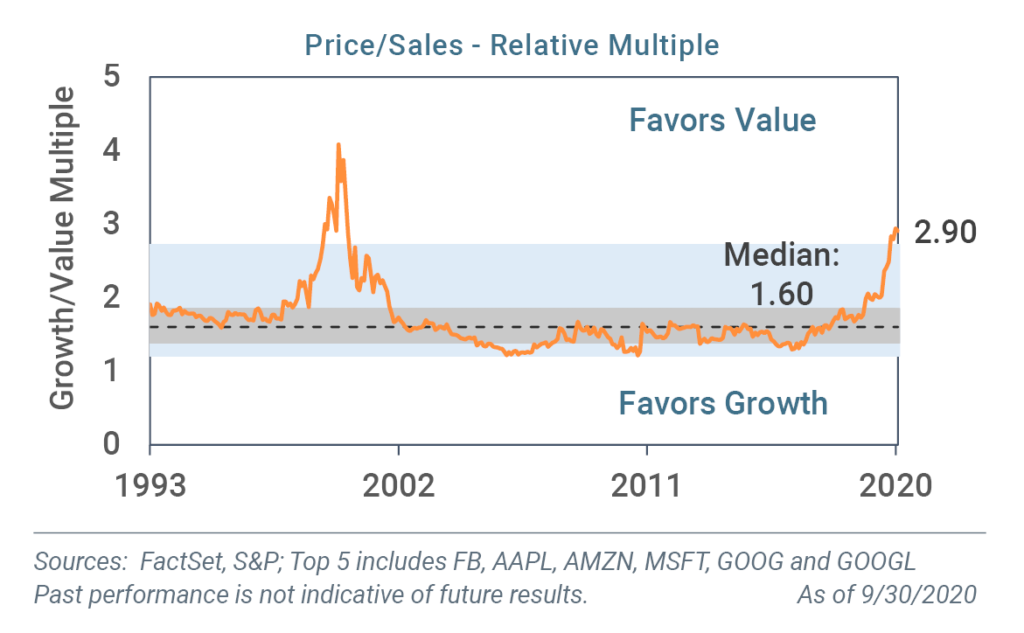 As today’s markets push to new extremes in many measures, a look back over historical data provides a reminder that cyclical patterns often emerge. The timing and scale of cyclical shifts are hard to predict, but investors should keep the market’s mean reverting behavior top of mind.

The cyclical nature of equity markets is shown in Exhibit 6 which compares the performance of U.S. stocks on an equal-weighted basis since 1946. The chart in Exhibit 6 illustrates that value stocks, as defined by high book/price ratios, have outperformed low price/book stocks in about 72 percent of rolling 12-month periods. The excess return in those periods has averaged 10.1 percent. In 12-month periods after low book/price stocks outperformed high book/price stocks by more than 15 percent, we see that high price/book stocks typically rebounded to lead performance in the next 12 months 81 percent of the time with an average spread of nearly 19 percent.

On average, the duration of these value versus growth cycles is approximately four years. Exhibit 7 charts 19 equity-style cycles since 1946 based on rolling 12-month relative book/price performance of the top versus bottom quintiles. Value cycles in this analysis are defined as six or more consecutive months of outperformance followed by negative 12-month returns.

The average drawdown period for value stocks was about 27 months with an average 12-month underperformance versus growth stocks of about 15 percent. After reaching a bottom, the average recovery period for value stocks was approximately 22 months with an average 12-month excess return of more than 30 percent relative to low book/price stocks. The most recent value drawdown period lasted approximately 40 months as shown by the orange line on the chart in Exhibit 7. Overall, value recovery periods have tended to be shorter and stronger than drawdown periods. 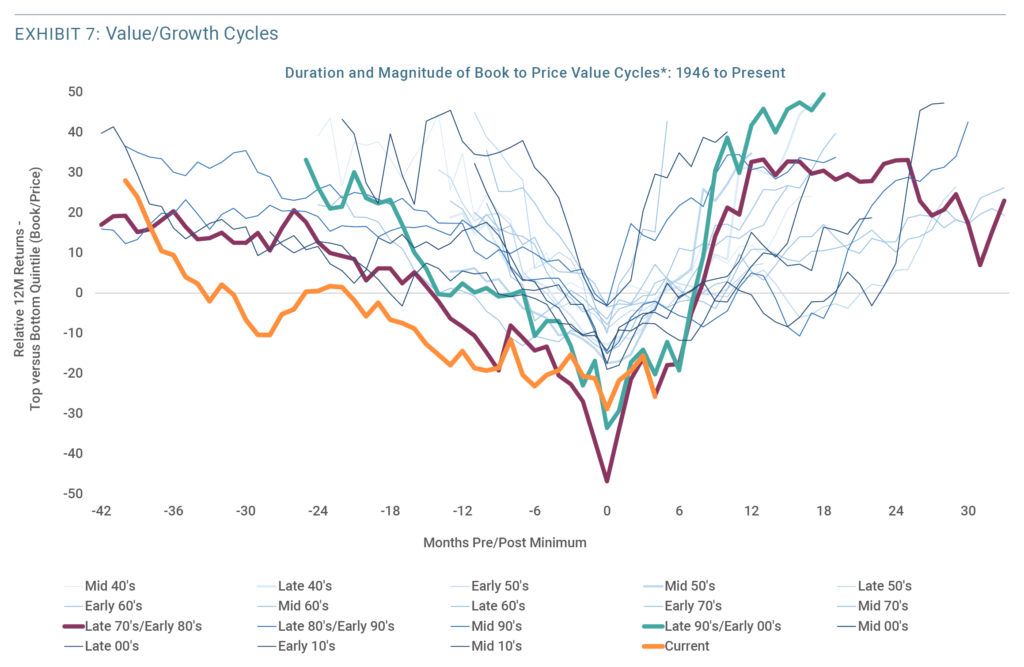 A similar cyclicality emerges when examining historical data for the five largest constituents of the S&P 500. In February 2000, five stocks had a 65 percent average gain for the prior 12 months, but in a reversal of fortune, that same group of companies had an average decline of -28 percent during the subsequent 12 months.

This fluidity means that there is a continuous shifting of the stocks ranking in the top 10 constituents of the S&P 500. The annual turnover of the S&P 500’s top 10 members has been approximately 18 percent versus 6 percent for the overall index since 1993.

Our current cycle may be reaching a peak based on an examination of the performance of average stock and the cap-weighted indexes. There is significant dispersion over rolling 12-month periods through market cycles, as illustrated in Exhibit 8. Equally weighted portfolio performance reached cyclical highs for the 12-month periods ending February 2001 and February 2010. More recently, results have been challenging, with the average stock underperforming the cap-weighted index by -12.7 percent over the 12 months ended September 30, 2020. This reversal has resulted in the widest gap for average stock performance since the 12 months ended March 1999. 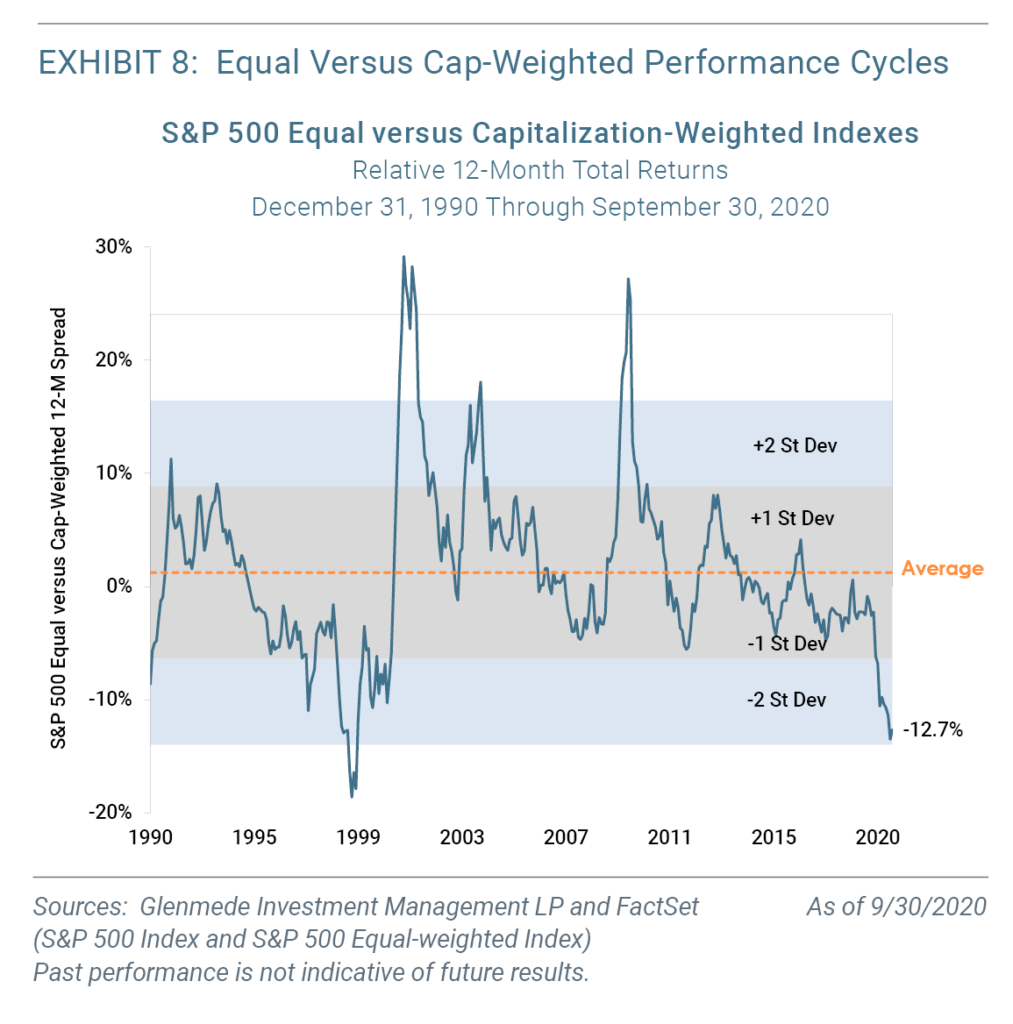 Market, economic and public health uncertainties have created a wide range of opinions about what the future holds for the markets as well as a questioning of traditional signals and measures for future asset allocation planning.

The fundamental question is whether the market’s current mega cap growth leaders will continue to outperform other companies. It seems difficult to rationalize that the elevated earnings growth of these largest companies can continue in perpetuity and outpace others to justify their overweighting in the benchmark indexes. As analysis shows, few companies have consistently maintained their relative top ten ranking for an extended time period. In our view of historical performance, cyclicality has been real.

Overall, we see that when data is analyzed through a longer-term lens, more consistent patterns emerge repeatedly that can be explained through a reliance on fundamentals and disciplined valuation. Active management strategies can help investors prepare for and take advantage of the opportunities presented over time by market cyclicality. In fact, a dollar invested at the start of 1958 in an equally-weighted portfolio would have grown to $647 versus $166 for the cap-weighted S&P 500 Index. In our view, passively investing in market cap-weighted indexes subjects investors to significant risks.

By acknowledging the concentration risk in the markets, embracing fact-based valuations and employing portfolio optimization techniques, investors can appropriately position themselves with confidence for the longer term.

1The approach throughout the paper is to use the maximum amount of data possible from various sources. As a result, starting dates for exhibits may differ due to availability of data from a particular source.

All data is as of 9/30/2020 unless otherwise noted. Opinions represent those of Glenmede Investment Management, LP (GIM) as of the date of this report and are for general informational purposes only. This document is intended for sophisticated, institutional investors only and is not intended to predict or guarantee the future performance of any individual security, market sector or the markets generally. GIM’s opinions may change at any time without notice to you.