On the Horizon: Preparing for a Weaker Dollar Era

Preparing for a Weaker Dollar Era

Profound shifts in the macro economic, competitive and political environment are converging to create a potentially long-lasting period of weakness for the world’s reserve currency. While many analysts and investors have been debating the potential for a short-term crash of the U.S. dollar (USD), in our view investors should be considering how to prepare for the possibility of a long-term period of dollar weakness.

Recent Depreciation Highlights That Issues Are Likely to Linger

After bouncing back from an early March low caused by COVID-19 concerns, the U.S. Dollar Index (DXY) has resumed its slide, dipping approximately ten percent from its mid-March peak and moving toward two-year lows (Exhibit 1). An analysis of the drivers for this decline shows a multitude of reasons for this trend, including macro conditions, monetary and fiscal policy, trading fundamentals and a structural shift in how the dollar works within the global investment framework. When examining the major U.S. dollar pairs1, we see four key issues behind the shift in the dollar’s valuation: 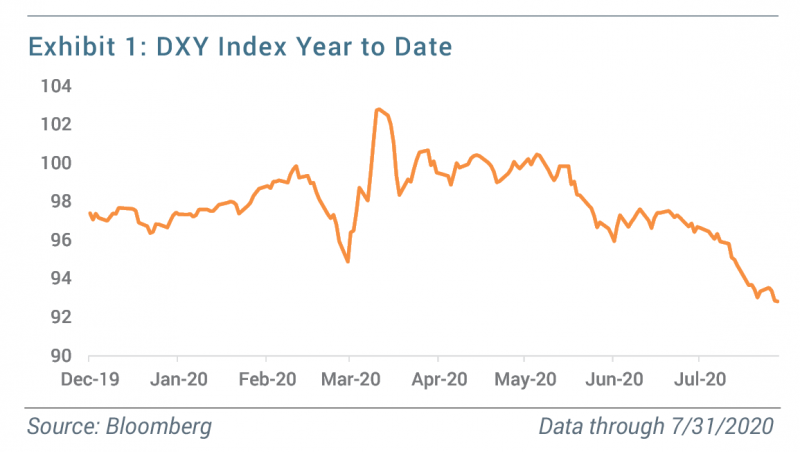 A myriad of issues makes it hard to argue that the U.S. dollar shortage continues to be an issue, as detailed in a recent GaveKal research report2. In 2008, the U.S. dollar was the world’s overarching currency, and the United States was one of the only major economies with positive interest rates. During that time, the U.S. current account deficit was between 4-6 percent of gross domestic product. Plus, foreign-domiciled U.S. dollar debt was a legitimate concern during the great recession. In contrast, today interest rates are hovering near the zero lower bound, the current account deficit is widening, and U.S. money supply (M2) is growing at 24.5 percent per year. Additionally, the U.S. Federal Reserve has also opened up swap lines with 14 other central banks. 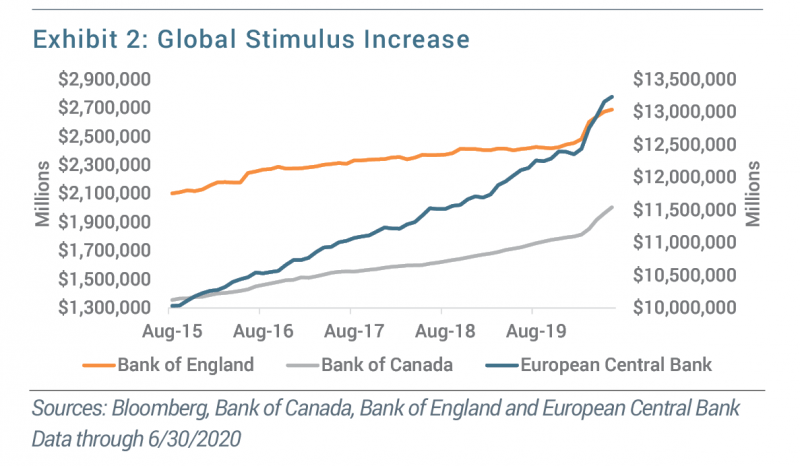 2. Competition across the globe:

A credible alternative to the U.S. dollar may be emerging as the European Union appears to be regaining strength, making it attractive to investors again. In a demonstration of solidarity that Alexander Hamilton would envy, EU members’ decision to jointly issue up to 750 billion euros for the EU’s historic stimulus plan signals reassuring unity for the euro. However, the real question will be whether the European experiment provides a lasting stable fiscal foundation. Overall, we believe the EU developments can change how reserve managers and asset allocators think about their options around the world. 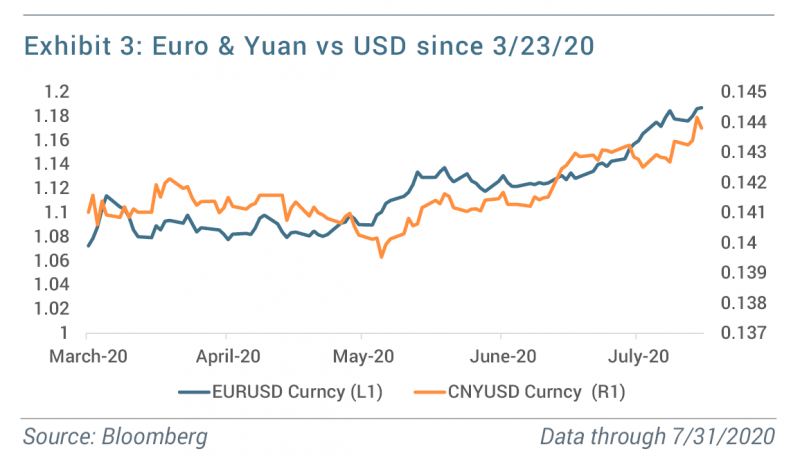 3. Interest rate divergence between China and the United Stats:

China is not monetizing the COVID-19 crisis, while the United States pursues a policy of debt monetization. This difference in monetary policy has the potential to create a stark divergence in long-term interest rates between the countries.

A chaotic U.S. political environment is making a very uncertain construct for the dollar. A divided government, a seeming inability to effectively address the COVID-19 pandemic, tax implications from the stimulus packages, election-year political dynamics and heightened Sino-U.S. tensions are just some of the concerns complicating monetary policy.

In short, we are now in a period of ample liquidity provisioned by the major world’s central banks combined with an uncertain U.S. domestic situation. The investment environment has changed markedly and in ways that are likely to continue for quite some time.

Given these significant and potentially long-term shifts, investors have a number of potential considerations as they map their asset allocation and investing strategies:

The decline in real interest rates against nominal rates completely bounded by the U.S. Federal Reserve has caused U.S. breakevens to rise significantly. While this would suggest a deflationary environment, there is real concern that persistent debt build up coupled with a depreciation in the dollar could create a higher likelihood of inflation as we move into 2021. According to Goldman Sachs (Gold Views: In search of a new reserve currency), the United States’ expanded balance sheet and vast money creation could heighten fears about the value of the dollar. The outcome likely would then be higher inflation but at a surmountable level. We are do not currently projecting anything similar to a 1970s scenario.

Gold can be a very good hedge in portfolios specifically against inflation. We believe that with real interest rates at all-time lows, an appropriate allocation to gold, as well as other metals such as silver, could make sense for investors.

A weaker dollar is good for external global growth. We believe that the current dollar dynamic may be a predictor of better returns in emerging markets.

The current dynamics may lead to a very different investment environment than we have seen recently. Monetary trends today are supportive to treasury inflation-protected securities, metals such as gold and silver, and emerging markets. Going forward, investors may need to consider a more global construct, looking well beyond the U.S. domestic focus that has dominated the past decade.

While we think about the dollar’s decline and the inflationary scenario that the market is worried about, we don’t perceive these as fundamentally problematic at this time. Real interest rates are the narrative. The driver pushing risk assets is the continued low interest real rate environment. As real interest rates continue to drop, and the dollar declines, risk assets persist as attractive opportunities. 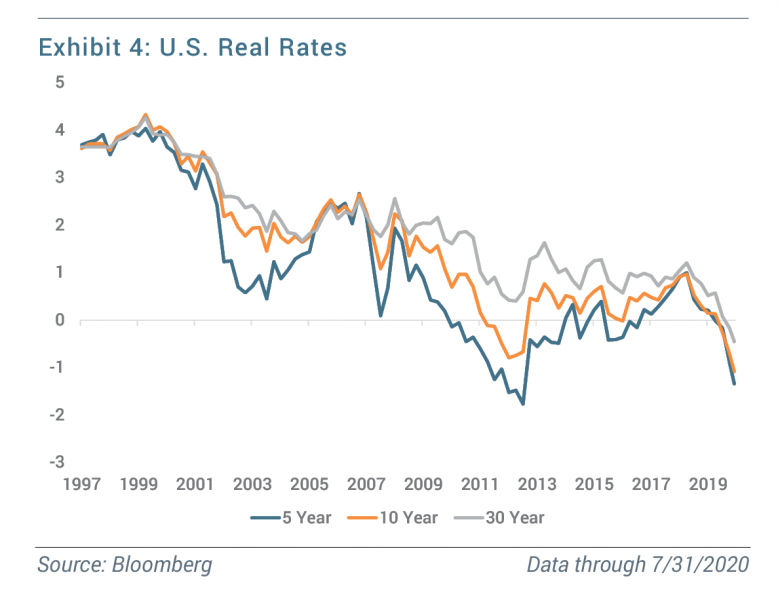 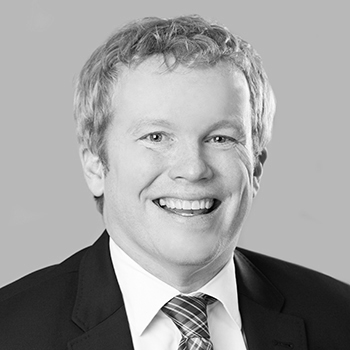 Glenmede Investment Management, LP, a registered Investment Advisor, is an affiliate of the Glenmede Trust Company, NA (GTC). The views expressed represent the opinions of GIM Portfolio Manager and Head of Fixed Income Robert Daly and are not intended as a recommendation of any security, sector or product, and any security identified herein may or may not have been bought, held and/or sold by GIM-managed portfolios. Any opinions or projections herein are based on information available at the time of publication and may change thereafter. Information obtained from third-party sources is assumed to be reliable, but accuracy is not guaranteed. Future developments (including performance) may differ materially from expectations and projections noted herein due to various risks and uncertainties and changes in underlying assumptions. For institutional and professional investors only.