It has been just over a year since the stock market hit bottom following the COVID-19 outbreak. Given everything that has happened during the ensuing months, it seems appropriate to examine the investment landscape during that time as well as changes in investor behaviors and what drove them. Among other things, volatility increased throughout the year as investors grappled with shifts in fiscal and monetary policies potentially affecting the attractiveness of various asset classes. Pandemic-induced shutdowns of professional sports led to a demand for more online gambling. And no-commission trading platforms such as Robinhood enticed a new group of retail investors to speculate in the stock market as one of the strongest bull runs in equity market history unfolded.

The equity investing process can be complicated during speculative periods of investment mania — and it appears we may be in such a period. In this paper, we examine four behavioral biases that create and feed investment manias.

Following are two examples of events that provide a glimpse into investor behavior: 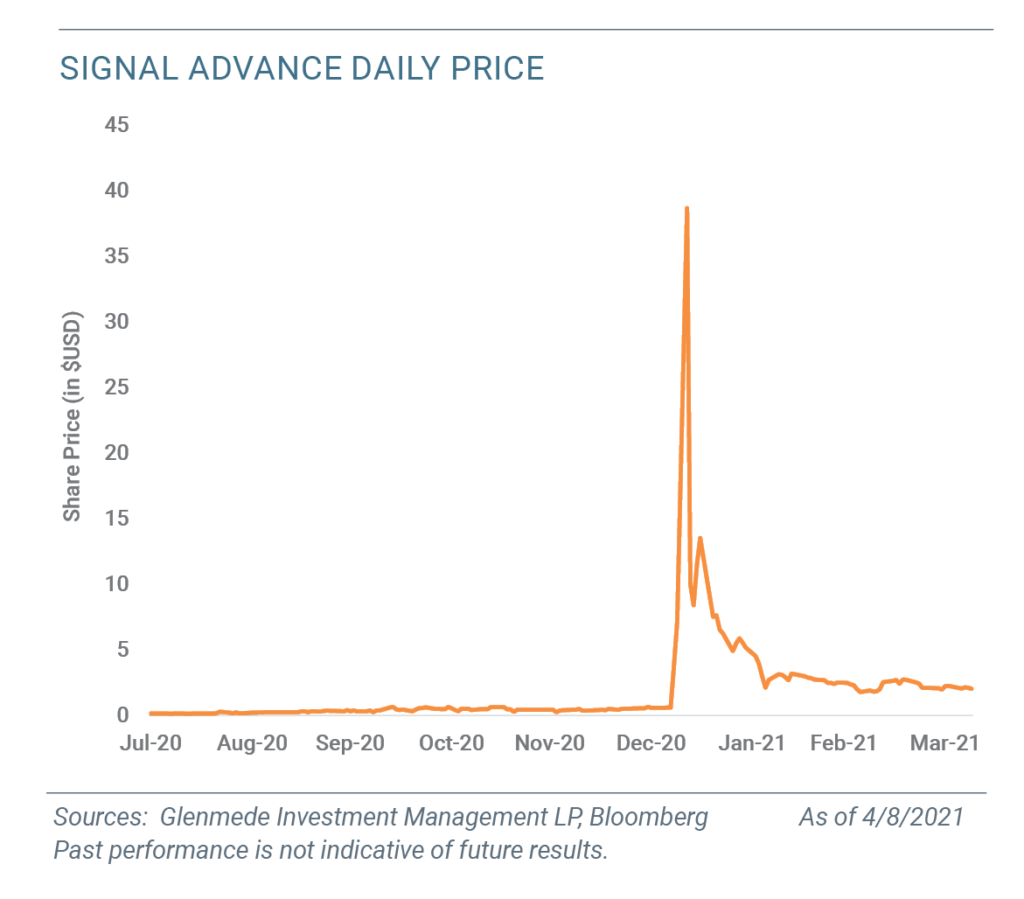 Historically, irrational moves such as the two mentioned above occur in the smaller market-capitalization range due to a lack of liquidity and general inefficiency of the asset class. But today, even larger-cap companies are seeing frenetic and illogical movements. Traditional measures of corporate quality, such as earnings and profitability, are being abandoned as investors turn their focus to an ever-shifting investment narrative to justify higher stock prices. Dave Portnoy, a well-known pundit on Twitter, even developed the catchphrase “stocks only go up.” While these behaviors and market actions are unsettling, they fit a classic pattern of behavioral biases during periods of investment euphoria.

Behavioral biases have always been part of human nature: 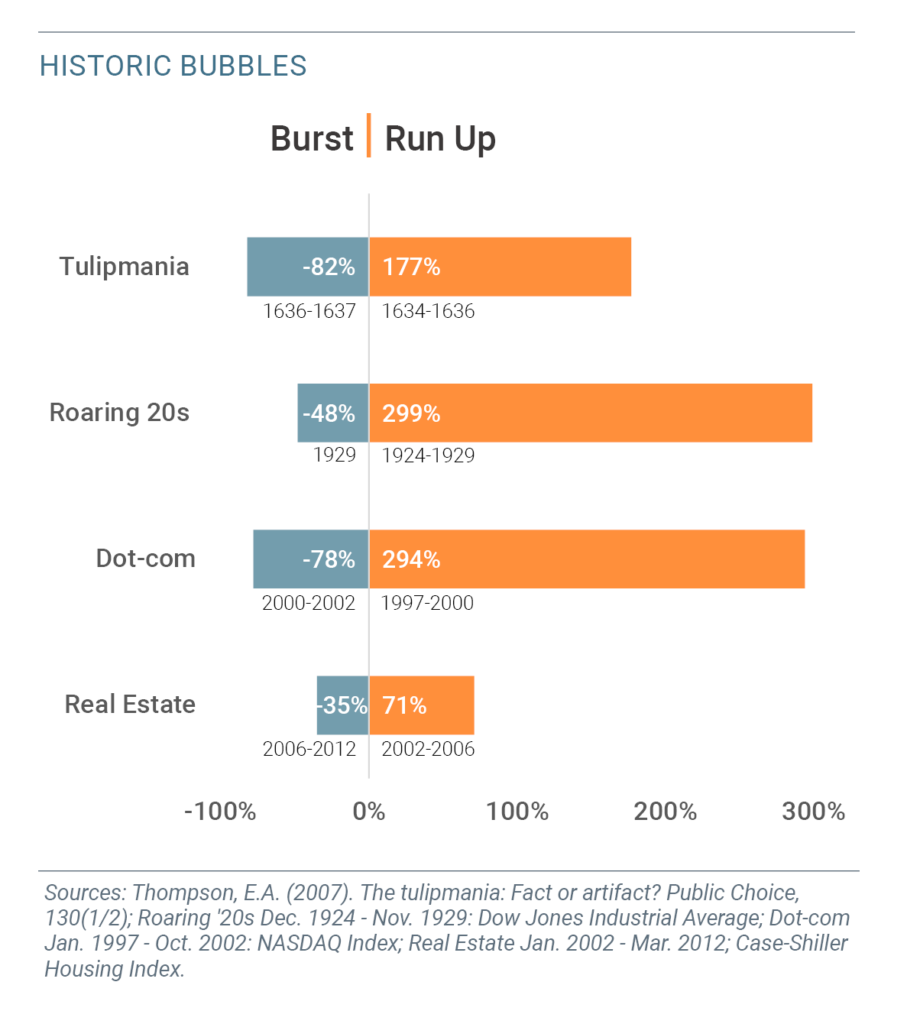 Following are four common behavioral biases for investors that could lead to better decision-making:

Overconfidence: when a person’s confidence in his or her judgments is greater than the objective accuracy of those judgments, especially when confidence is high.
Herding: when people follow the actions of the crowd instead of making independent decisions based on their own information.
Confirmation : the tendency to search for, interpret, favor and recall information in a way that confirms or supports one’s prior beliefs or values.
Anchoring : causes one to rely too heavily on the first piece of information received about a topic and the tendency to view subsequent information through the lens of this first piece of information.

If the stock market rewards a company with a higher stock price despite poor fundamentals, investors may begin to think it is their trading prowess that has led to this positive result as opposed to simply being part of a rising market tide. A successful result reinforces the overconfidence bias and could lead to greater risk-taking. When returns are strong, even if they run counter to historical market experience, investors want to be optimistic and may overestimate their investment acumen. The end result is that overconfidence causes many investors to be blinded to an investment’s risks, and they end up on the wrong side of the trade as the mania unwinds.

The herding bias exacerbates panic buying or selling because investors feel they need to take some action if they perceive a majority of investors are trading in that direction. It can be emotionally or psychologically painful to go against the crowd. Psychologists have conducted numerous experiments demonstrating that even if the crowd-based investment decision is clearly incorrect, many investors will go along with that crowd decision as opposed to keeping their own ideas. Further exacerbating the bias, new communication and trading platforms have led to a gamification of investing, which runs counter to decades of prior investment experience. For instance, the popular Reddit forum WallStreetBets has taken herding to an extreme: Investors with the strongest views are admiringly referred to as having “diamond hands,” while those who perhaps cut their losses are admonished for having “paper hands.” When greed inevitably shifts to fear, it is likely today’s online bravado will be replaced with a panicked rush to the exit.

It is emotionally difficult to consider points of view that are counter to one’s own. Considering only information that makes one feel good simply reinforces the overconfidence bias. Technology and information filters fuel the Confirmation bias. Investors have to make a concerted effort to find information that challenges their views and then absorb the dissenting information with an open mind. Unfortunately, because this can be a distressing process, many investors are comfortable (and confident) to blindly follow the crowd.

Anchoring is an example of a decision-making heuristic, as described by Daniel Kahneman and Amos Tversky.2 A heuristic is a way to simplify decision-making based on a few variables as opposed to taking time to think carefully about new pieces of information. Decision-making heuristics may be useful in making life-and-death snap judgments, but not so for long-term investment decisions. Making gut decisions is easier and less emotionally taxing than making a more thoughtful decision in which all sides of an issue are considered. In his 2011 book Thinking, Fast and Slow, Kahneman lays out the different decision-making systems as follows:

The Anchoring bias tends to lead to a refusal to revise one’s beliefs when presented with new information. Instead, fresh and conflicting pieces of information can be swatted away by declaring that “it’s different this time,” or that “it isn’t different this time.” Either way, new information is likely to be discounted in favor of the initial viewpoint to which an investor has become anchored. In a period of market speculation, trading manias tend to lead to fast decision-making, which then feeds into overconfidence and often leads to overtrading and less-than-optimal returns. All four biases are intertwined and often compound one another, potentially leading to unwanted outcomes.

After years of low interest rates, inflation and little economic growth, it appears these market indicators may be reversing course. Should this hold true, it would likely mean the end of both a 30+ year bull market in fixed income and an extended period of dominance by large-cap, growth-oriented stocks. As often happens during shifts in the investment landscape, many issues that prospered have begun to falter, while many of the shunned assets are rising in value. Behavioral mistakes would tend to lead an investor to stick with the prior winners because those are the assets that brought investment success, and any reconsideration would mean challenging an overconfident assessment of one’s abilities in those gains. Peaks in investment manias tend to lead to greater risk-taking due to an overconfidence in investment abilities, herding into a small subset of securities and a lack of consideration of downside risks due to confirmation bias and anchoring. As we highlighted in our October 2020 paper “Why Profitability Matters: Positive versus Negative Earnings,” all of these facets are present in today’s financial markets.

Many investors may be aware they are investing in a mania but continue to do so anyway. As the subprime mortgage crisis raged in 2007, then-CEO of Citibank Chuck Prince told the Financial Times that “when the music stops, in terms of liquidity, things will be complicated. But as long as the music is playing, you’ve got to get up and dance.”4 Of course, things got very complicated and the Great Financial Crisis ensued a few months after his comments. Many investors believe they will be able to time the boom and the bust perfectly and delude themselves into believing they can avoid loss. While the financial press will highlight the rare individuals who are successful in this way, history has shown that a majority of investors will indeed incur losses as the mania unwinds.

The single most important defense against becoming a casualty of the inevitable bust that follows an investment mania is simply to be aware that decision-making bias is present in most people. Awareness can help to mitigate biases, but there is no way to completely eradicate them. Consistent and dispassionate decision-making is key to long-term success. As economist John Maynard Keynes once said, “Markets can remain irrational longer than you can remain solvent.”

Any opinions, expectations or projections expressed herein are based on information available at the time of publication and may change thereafter, and actual future developments or outcomes (including performance) may differ materially from any opinions, expectations or projections expressed herein due to various risks and uncertainties. Information obtained from third parties, including any source identified herein, is assumed to be reliable, but accuracy cannot be assured. This paper represents the view of its authors as of the date it was produced, and may change without notice. There can be no assurance that the same factors would result in the same decisions being made in the future. In addition, the views are not intended as a recommendation of any security, sector or product. Returns reported represent past performance and are not indicative of future results.