Continued Opportunities for 2022 Amidst Market Volatility

Inflation, the dramatic repricing of the Federal Reserve’s (Fed) tightening cycle and the Russian invasion of Ukraine drove a risk-off market sentiment this quarter. The S&P 500 index experienced its worst quarterly return since the depths of COVID-19 in Q1 2020, with a drawdown in Q1 2022 of -4.6%. After closing at 90 new all-time highs over the past six quarters, the S&P 500 closed at only one new all-time high this quarter, on the first trading day of the year, entering correction territory (defined as a 10% drawdown) 34 trading days later, although ultimately recouping over half of those losses in the final weeks of the quarter. The CBOE Volatility Index (VIX) closed at an average of 25.2% for the quarter, above the longer-term average since 1990 of 19.5% and reflective of increased investor perceived risk and uncertainty in the market.

Small cap (Russell 2000 Index) shifted to a negative return this quarter, experiencing a decline of 7.5%, its worst quarterly performance since Q1 2020. Large cap growth underperformed large cap value for the first time in a year, with the Russell 1000 Growth Index declining 9.0% compared to the Russell 1000 Value index decline of 0.7%. Small cap growth (Russell 2000 Growth Index) underperformed small cap value (Russell 2000 Value Index) for the sixth quarter in a row to end the quarter with a return of -12.6% for growth versus -2.4% for value. International markets also saw weakness with a decline of 5.8% for Q1 2022 for developed international (MSCI EAFE Index) and a decline of 6.9% for international emerging markets (MSCI Emerging Markets Index). During the quarter, MSCI reclassified Russian indices from emerging markets to standalone markets, removing Russian stock exposure for the MSCI Emerging Market Index.

The impact of the repricing of the Fed’s tightening cycle amidst a high inflation narrative drove U.S. Treasuries to some of the worst quarterly performance on record, with the U.S. Treasury 2-year yield and 10-year yield increasing over 150 bps to 2.30% and 80 bps to 2.33%, respectively. The flattening of the yield curve resulting in the inversion of the 5-year/30-year U.S. Treasury yield curve for the first time in 16 years, and the brief inversion of the 2-year/10-year U.S. Treasury yield curve increased investor concern of an eventual recession and potential Fed misstep. The year started with market expectations of three to four rate hikes in 2022, but ended the quarter with the expectation of potentially nine 25 bps rate hikes this year following the kickoff 25 bps hike in March.

With the February CPI reading of 7.9% the highest year-over-year increase in 40 years, the winners of the inflationary narrative and geopolitical tensions were the commodity sectors, with the broader commodity basket experiencing some of the strongest quarterly performance in history. WTI crude increased over 30% on the quarter, and S&P 500 Energy sector stocks saw a quarterly record return of 39%.

To start the year, we noted the potential of the stellar economic growth from 2021 to ripple into 2022, with the expectation of monetary tightening, waning fiscal support and midterm elections likely to add volatility to markets. While corporate earnings will likely remain robust, employment and job openings strong and corporate and consumer balance sheets healthy for now, the continued concern of a Fed misstep, ongoing geopolitical tensions and nontransitory inflation will likely continue to create market volatility as investors begin to contemplate when and how deep of a recession may be coming.

In our Q4 2021 Statement, we started the year highlighting three areas that we thought could offer interesting opportunities for 2022 — active small cap, active large cap and volatility strategies. In the sections that follow, we provide updates as we continue to see opportunities in these areas in 2022. 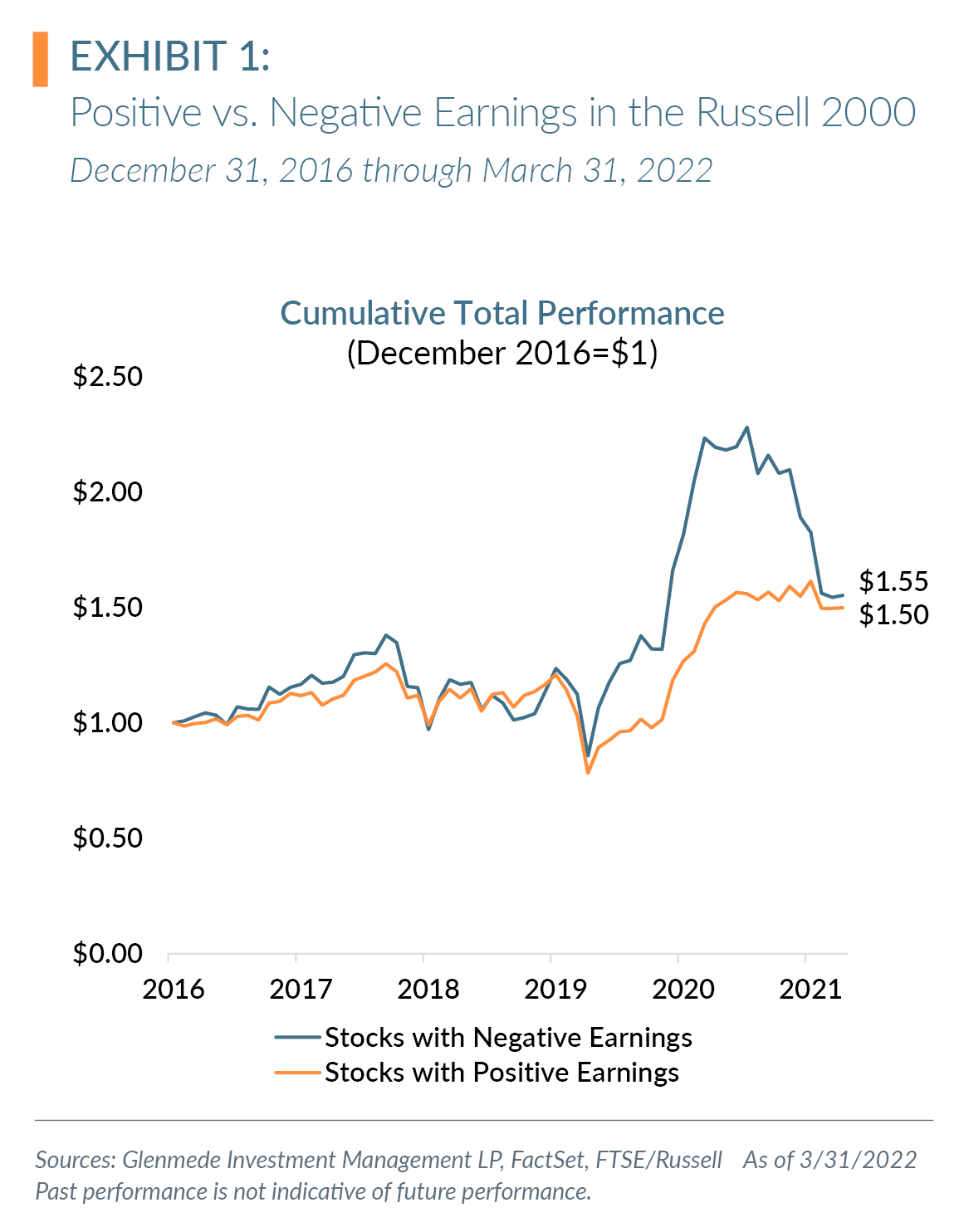 Using the longest available history for which we have usable data for the Russell 2000 (since December 31, 1986), positive earners have experienced almost 2.5x the annualized return with less than two-thirds the risk (annualized return for positive earners of 10.3% versus negative earners with 3.9% and standard deviation of 19.4% versus 32.9%, respectively). A significant portion of this longer-term outperformance of positive earners is the avoidance of large drawdowns following market bubble bursts, like the internet bubble in the early 2000s, the global financial crisis in 2008 and the more recent post-COVID lockdown of 2020 normalization.

We continue to believe positive earning companies will continue to outperform negative earning companies in the long run, even with the cyclicality of outperformance of negative earners and the more recent normalization of these stocks. Additionally, we believe the small cap universe offers a more compelling valuation risk/reward currently relative to large caps. The ratio of large cap stocks versus small cap stocks on a price-to-book, dividend yield, price-to-earnings and price-to-sales are all in the bottom 4% of observations over the past 10 and 20 years, as noted in Exhibit 2. The one metric not screening cheap on a relative basis is free cash flow yield (includes dividends, excludes financial companies), which still favors large caps.

It has taken over a decade for a number of imbalances in the financial system to build, and this has created a dynamic market environment. As the Fed embarks on a tightening cycle to combat persistent inflation, geopolitics remains in flux as globalization unwinds, and the aforementioned attractive valuation levels, we believe positive earning small caps offer a compelling risk/reward relative to other equities. 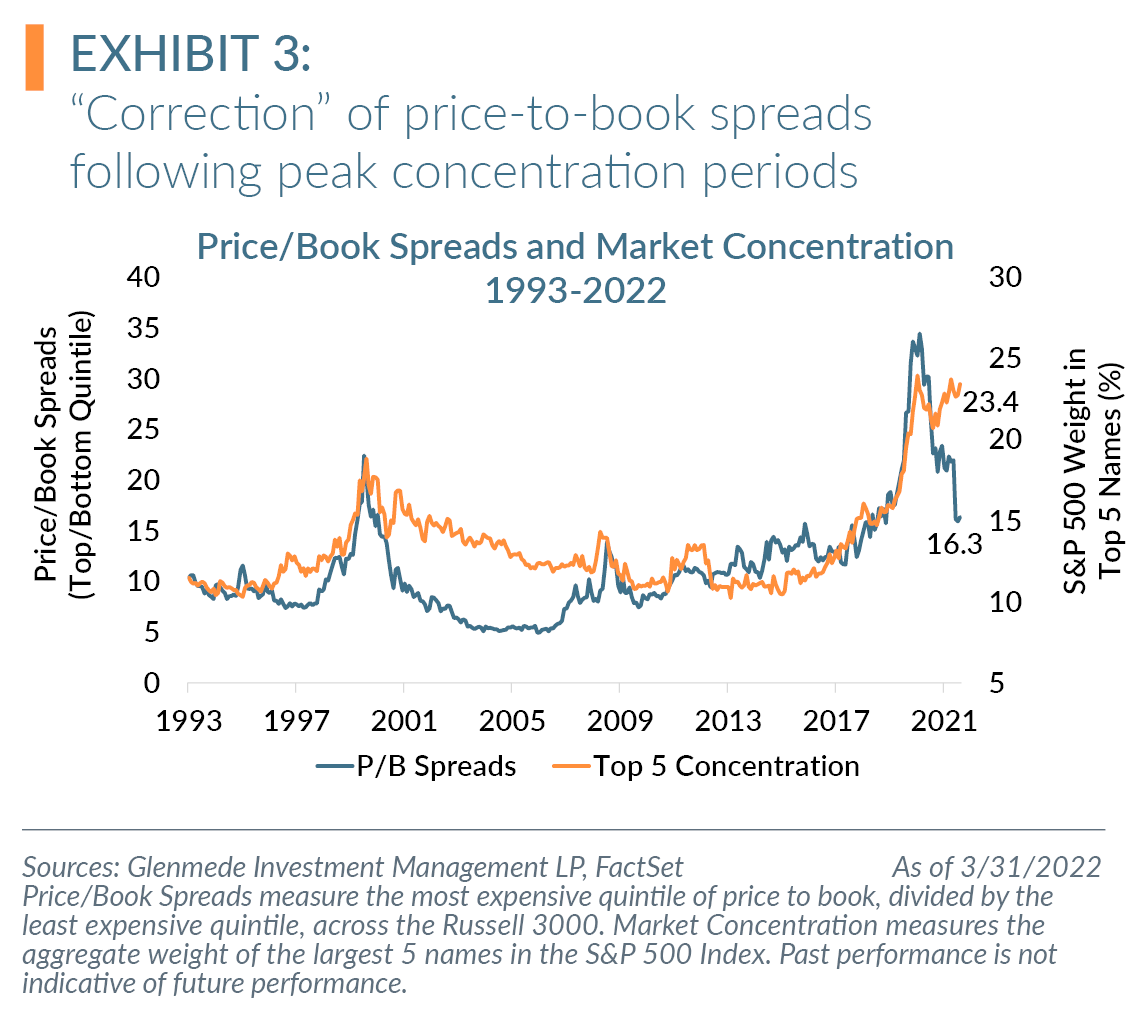 At the start of the year, we noted the increased concentration of a handful of names within the large cap indices, which persisted into Q1 2022. Specifically, the top five weights in the S&P 500 (Apple, Microsoft, Amazon, Alphabet and Tesla) represented 23.4% of the index as of March 31, 2022. Concentration of this magnitude is rare, with only the dot-com and global financial crisis of 2008 periods experiencing peaks of greater than 14% since 1993.

As seen in Exhibit 3, the “correction” of price-to-book spreads has been sharp since the peak concentration in August 2020, similar to previous periods of extremes. In Q1 2022, amidst the repricing of the Fed’s tightening cycle, large cap growth underperformed large cap value, with the Russell 1000 Growth index declining 9.0% compared to a 0.7% decline for the Russell 1000 Value index. While growth stocks rebounded in the latter half of March to being a rounding error away from a bear market (Russell 1000 Growth index declined 19.8% from a market high on January 3, 2022, to a quarter low on March 14, 2022, versus a 6.0% decline in the Russell 1000 Value index during this same period), we believe investor focus has likely shifted from the previous few years of “growth at any cost” narrative to a more reasonable valuation narrative.

In our Q4 2021 Quarterly Statement, we noted that after notable outperformance of the top 5 weightings for the three years prior to peak concentration in March 2000 (14.0% annualized outperformance between March 1997 through March 2000), these same top five underperformed the broader index by -6.1% annualized over the next three years. If market concentration were to normalize as it did during previous peaks, this would suggest that a strategy based on avoiding the largest names in the index should outperform a pure value-based approach, in comparison to their historical performance. We continue to believe this concentration could create an opportunity for outperformance by active strategies with lower concentrations in these mega caps or large cap allocations that are more diversified versus strategies with high exposures to these five largest companies. 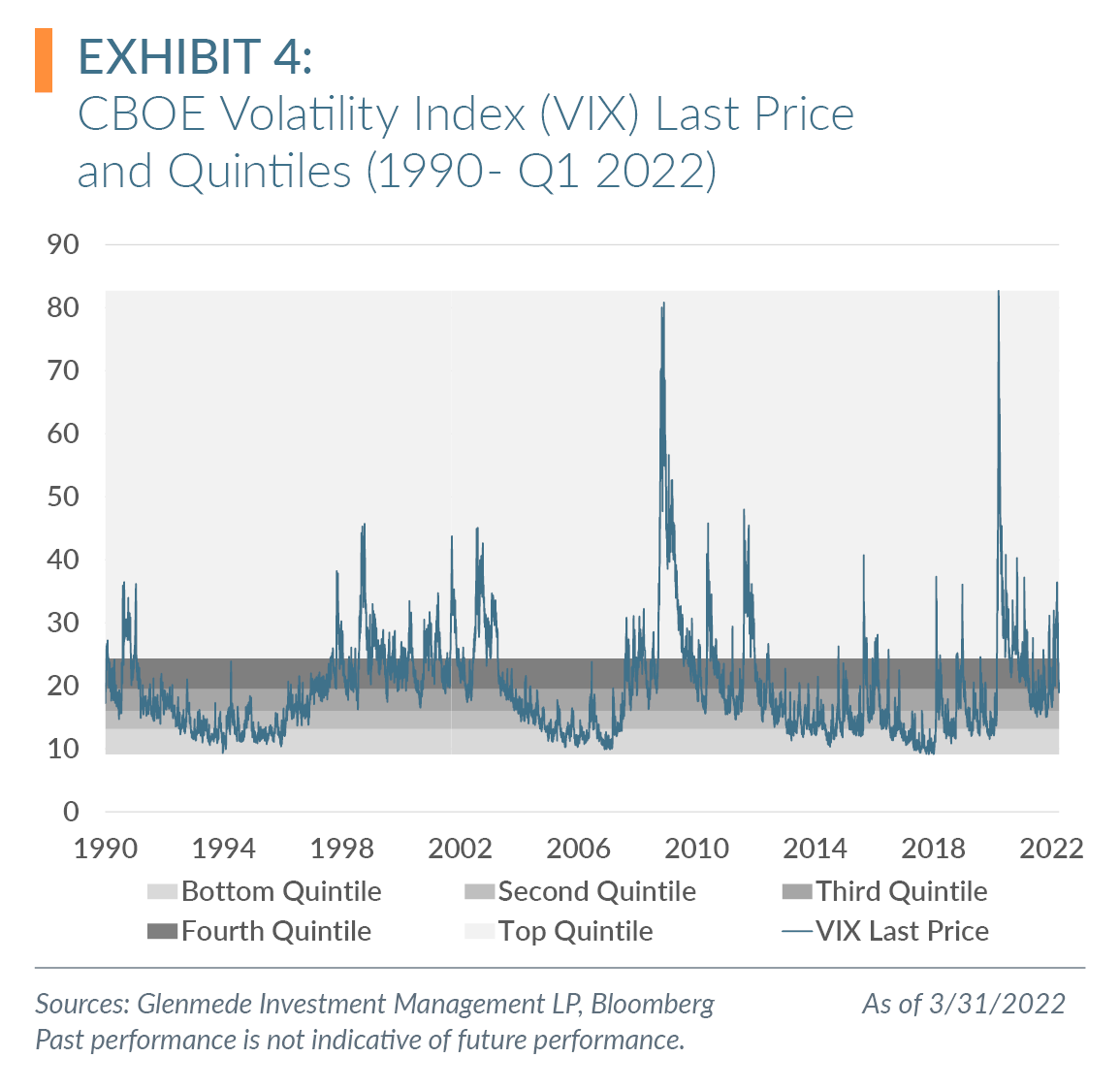 Like many other aspects of the market, volatility cycles through regimes. Our expectation for 2022 was – and continues to be – that the broader markets will remain in a higher volatility regime. As previously noted, the VIX closed at an average of 25.2% for the quarter, above the longer-term average since 1990 of 19.5% and reflective of the increased investor perceived risk and uncertainty in the market.

Using the VIX as a proxy for market volatility, Exhibit 4 charts the VIX closing price over the past 32 years divided into quintiles. More than 50% of Q1 2022 saw the VIX close within the top quintile and 86% of the daily close observations of the VIX were in the top two quintiles, greater than the distributional expectations of 20% and 40%, respectively.

All data is as of 3/31/2022 unless otherwise noted. Opinions represent those of Glenmede Investment Management LP (GIM) as of the date of this report and are for general informational purposes only. This document is intended for sophisticated, institutional investors only and is not intended to predict or guarantee the future performance of any individual security, market sector or the markets generally. GIM’s opinions may change at any time without notice to you.