Are We There Yet?

Global fiscal tightening drove a volatile Q3 2022, with few hiding places from drawdowns. Market participants moved to riskier assets midquarter, discounting the Federal Reserve’s (Fed’s) tightening rhetoric. Fed officials increased their hawkish tone of raising rates to combat any beliefs that this tightening cycle would be a blip and that the Fed would return to cuts by next year. Inflation numbers continue to sit near 40-year highs while employment remains tight, driving the Fed’s higher-for-longer narrative. Increased concerns of policy mistakes not only by the Fed but also by other global central banks that are tightening continue to weigh on market sentiment, which is reflected in both implied and realized volatility levels of stocks and bonds elevated relative to history.

The S&P 500 Index finished Q3 2022 with the worst start in the first three quarters of a year in two decades (year-to-date total return of -23.9%). The index experienced its third consecutive negative return with a drawdown in Q3 2022 of 4.9%, something not seen since the Global Financial Crisis of 2008-2009. Large cap growth outperformed large cap value for the first time in three quarters, with the Russell 1000 Growth Index declining 3.6% compared to the Russell 1000 Value Index down 5.6%. Large cap growth (Russell 1000 Growth Index) is down 30.7% year-to-date compared to large cap value (Russell 1000 Value Index) declining 17.8% during the same period.

Small cap (Russell 2000 Index) also closed the quarter in the red with a drawdown of 2.2%, bringing the year-to-date decline to 25.1%, the worst three quarter start to the year since the index’s inception in January 1984. Small cap growth (Russell 2000 Growth Index) eked out a positive return this quarter of 24bps and outperformed the Russell 2000 Value Index for the first time in two years, with the value index declining by 4.6% in the third quarter.

The Fed’s tightening cycle pushed yields higher and bond prices lower, resulting in another quarter of negative returns across fixed income products, leaving many investors without the safe haven expectations of fixed income. In fact, since 1976 there has never been a period of negative returns for both stocks and bonds for three consecutive quarters. The U.S. Treasury curve experienced its largest inversion in over 22 years of -51bps in September. Yield curve inversion is often considered a precursor to a recession. More specifically, using data from 1969 through Q3 2022,when more than 50% of the U.S. Treasury yield curve was inverted, a recession followed. As of Q3 2022, 56% of the yield curve was inverted.

In our previous Quarterly Statements, we reiterated our expectations for higher market volatility this year given the unwinding of the global monetary support of the past decade, although pockets of robustness could remain in the economy via earnings expectations. Thus far, both have been realized. The Cboe Volatility Index® (VIX®) closed at an average of 24.9 for the quarter, above the longer-term average of 19.6 since 1990. The ICE BofA MOVE Index (MOVE) closed at an average of 130.0, above the longer-term average of 91.5 since 1990. Both increased volatility indices reflect the continued perception of risk and uncertainty in the market by investors.

In terms of earnings, the Q2 2022 earnings reports were better than expected, with 74% and 70% of companies in the S&P 500 reporting positive earnings and revenue surprises, respectively. We continue to expect market volatility, as the repricing of higher interest rates on the markets and the economy has yet to be fully realized. Robust earnings expectations through a bear market are unusual, yet that has been the trend for this cycle. As investors experience multiple compression and remain focused on the yet to be seen potential weakness of earnings expectations to decline per the typical trend in a bear market, uncertainty and therefore volatility should remain.

A question we have been asking ourselves is, “are we there yet?” By this question, we mean, as the market priced in negative news and expectations so that risk/reward is becoming more appealing? In other words, are we bottoming? Continuing our investment strategy themes for 2022 as noted in our previous statements,1 here we discuss the pockets of the market where we believe opportunity is beginning to emerge and the areas where we see risk from the passive vehicles. In short, we believe active small cap, active large cap and volatility strategies remain attractive. 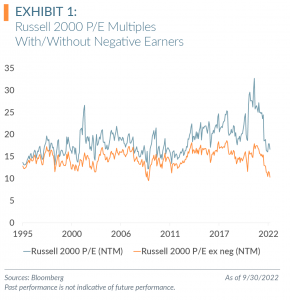 As of Q3 2022, the Russell 2000 Index has a year-to-date total return drawdown of 25.1% and a 31% total return decline from an index high on November 8, 2021. Broadly speaking, small cap stocks could certainly decline from current levels. However, we believe the risk/reward has shifted in favor of owning small caps relative to large caps that have held up better through this market sell-off (the Russell 1000 Index has experienced a total drawdown of 24.2% from the November 8, 2021, high for the Russell 2000 Index). Comparing 20 years of month-end valuations, small cap (Russell 2000 Index) continues to trade at attractive valuations relative to large cap (Russell 1000 Index). Specifically, price/book, dividend yield, price/sales and forward price/earnings (P/E) month-end multiples relative to large cap rank in the 5th, 7th, 11th and 14th percentiles of monthly observations, respectively, over the past 20 years. Free cash flow yield, excluding financials, still favors large caps relative to small caps.

Comparing small cap stocks to each other, Exhibit 1 looks at the month-end Russell 2000 Index 12-month forward P/E multiples since 1995 using all stocks versus excluding negative earners (starting date for available Bloomberg data). The forward P/E of 16.6 for the Russell 2000 Index is below the median multiple of 18.3 since 1995, ranking in the bottom third of observations recorded since 1995. We see the more attractive cohort as the companies with positive earnings-per-share estimates. More specifically, the forward P/E excluding negative EPS of 10.3 is below the median multiple since 1995 of 14.7, ranking in the bottom 1% of month-end observations over this time period.

We believe the market has yet to fully realize the impact of higher interest rates. This observation, along with Fed Chairman Jerome Powell continually stating he has “taken away the punch bowl” from the markets, leads us to continue to see risks to those negative earners that experienced notable outperformance relative to positive earners during a period of unprecedented fiscal and monetary support. Negative earners represent roughly 26% of the Russell 2000 Index, forcing passive investor exposure to the more expensive valuation stocks and more susceptible to headwinds from rising rates. As such, we continue to favor active small cap strategies that seek to invest in positive earners with attractive valuations.

Large Cap: Pockets of Attractive Valuation, but Most Expensive Names Remain So 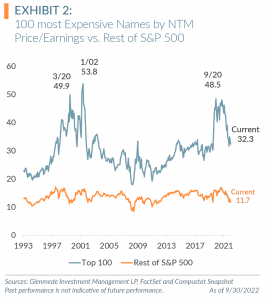 The broader correction in valuation spreads made by the market in the past year slowed this quarter. Specifically, as noted previously, large cap growth (Russell 1000 Growth Index) outperformed large cap value (Russell 1000 Value Index) for the first time in three quarters. For a different perspective, we break down the S&P 500 Index by the 100 most expensive stocks versus the rest of the index. Specifically, Exhibit 2 compares the 100 most expensive stocks of the S&P 500 Index based on a P/E multiple using next 12-month earnings (NTM) to the remaining 400 stocks of the index using the same valuation metric, equal dollar weighted. Year-to-date, the multiple of the top 100 has declined from 42.9 P/E to 32.3 P/E — an approximate 25% multiple compression. This compares to a median P/E for the top 100 stocks since September 1993 of 28.7 times.

We are proponents of active management and believe the bifurcation of the current market is creating an opportune time for active management. Specifically, we have often discussed the market concentration in the broader large cap indices like the S&P 500 and Russell 1000. We believe this to be a risk to strategies that do not seek to underweight this concentration (for more information, please see our previous Quarterly Statements). Not inconsistent with our concerns of large cap index concentration, we also believe an opportunity remains for building active large cap portfolios with an attractive valuation bias. As noted in Exhibit 2, not all stocks are experiencing the same multiple compression during this year’s sell-off. While the broader indices may be approaching valuations in line with longer-term averages, as noted by the equal-weighted S&P 500 Index trading near its longer-term average P/E multiple of 15.8, within this index there are stocks that are above and below longer-term averages. This suggests the risk/reward of owning certain stocks over others may offer opportunities not captured with passive exposures that do not differentiate between the valuation multiples. We continue to believe that passive large cap exposure has risk that could potentially be mitigated by exposure to strategies that underweight both the concentrated stocks and those trading rich valuations relative to longer-term averages.

Volatility: Exhausting Back and Forth with No Knockout 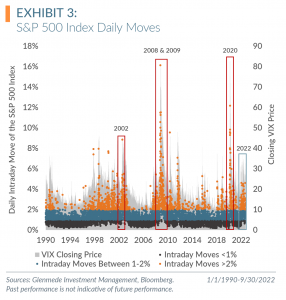 Both implied and realized2 volatility of the S&P 500 Index remained elevated in Q3 2022 relative to history. The VIX® index is a measurement of investor expectations for volatility for the S&P 500 index 30 days forward. As noted previously, the VIX closed at an average of 24.9% for the quarter, above the longer-term average of 19.5% since 1990. While the expectation as measured by the VIX was elevated, the realized volatility was also higher relative to history. Specifically, in Exhibit 3 we measure the daily3 move of the S&P 500 every day since 1990 when available data for the VIX began. In Q3 2022, the index experienced 20 days with daily moves of +/- 2%, more than double the quarterly average since 1990 of 9.8 days. Interestingly, every quarter this year has experienced double, if not triple, the average number of +/- 2% daily move relative to history.

A few takeaways about this chart. First, year-to-date the S&P 500 has had 85 days with a daily move of more than 2%. This is above the 83 days recorded in 2020 and on pace to be the second highest year, behind only 2008 during the throes of the Global Financial Crisis. Second, the circles of each of these years incorporates the highest daily move noted for that year. As of the end of Q3 2022, the S&P 500 did not experience a daily move of >5%, which is the longer-term average since 1990 of the maximum daily move for the index. Simply, the S&P 500 is on pace to experience a near record number of days with daily moves of more than +/- 2% while staying within a band of +/- 5% daily moves.

We continue to expect both realized and implied volatility to remain elevated, particularly into Q4 2022 with the U.S. midterm elections. We typically reference the VIX as a proxy for this measurement but believe we will continue to see increased volatility across more than just domestic large cap, as noted by the MOVE Index. The market is repricing risk across asset classes with a new regime of higher inflation, a tightening Fed and a potential global recession. None of these issues is likely to be resolved quickly, and any remaining investor expectations of the monetary support of the past decade will need to be adjusted.

All data is as of 9/30/2022 unless otherwise noted. Opinions represent those of Glenmede Investment Management LP (GIM) as of the date of this report and are for general informational purposes only. This document is intended for sophisticated, institutional investors only and is not intended to predict or guarantee the future performance of any individual security, market sector or the markets generally. GIM’s opinions may change at any time without notice to you.

Any opinions, expectations or projections expressed herein are based on information available at the time of publication and may change thereafter, and actual future developments or outcomes (including performance) may differ materially from any opinions, expectations or projections expressed herein due to various risks and uncertainties. Information obtained from third parties, including any source identified herein, is assumed to be reliable, but accuracy cannot be assured. This paper represents the view of its authors as of the date it was produced, and may change without notice. There can be no assurance that the same factors would result in the same decisions being made in the future. In addition, the views are not intended as a recommendation of any security, sector or product. Returns reported represent past performance and are not indicative of future results. Actual performance may be lower or higher than the performance set forth above