The Federal Reserve and inflation continued to take center stage in Q4 2022, although the narrative shifted from a focus on a “Fed Pivot” to a potential “Peak Fed” with some reprieve from cooler CPI prints for October and November. After four straight 75 basis point rate hikes, the Fed finished the year with a more muted 50 bps rate hike in December, but Fed speak remained hawkish. China relaxed its zero-COVID policy, creating a more optimistic tone for investors. However, concerns of a potential global recession remained.

The shift from Fed Pivot to Peak Fed led to a softening of the trend of higher yields and lower bond prices in fixed income. While U.S. Treasury yields ticked up across the curve and continued to pressure bond prices, other areas of fixed income strategies like corporate bonds saw positive returns for the quarter. The U.S. Treasury curve continued inverting in Q4, with the U.S. Treasury 2Y-10Y curve inversion getting to a low of 83 bps in December, a level not seen since October 1981, before retracing some of the inversion through quarter end. Yield curve inversion is often considered a precursor to a recession.

Investor focus for 2023 will likely be on a potential recession. We believe the market has not fully priced in much of the recent Fed tightening, and increased economic pain may lie ahead. While the U.S. equity markets entered a bear market in 2022, much of the price decline reflected multiple compression, not earnings declines. FactSet estimates 2022 earnings per share will likely increase relative to 2021,  which is not the more typical impact to earnings in a recession. Specifically, using data from 1900 to present, the average decline in last‐12‐month EPS for the S&P 500 from the quarterly recession peaks to bottom, as defined by the National Bureau of Economic Research, is 15.3%. This “Waiting for Godot” moment of an earnings re-risk could continue to create market uncertainty and volatility.

We continue to favor “good earnings” versus “good stories” investing in 2023, leaning more toward value in both small and large cap stocks. However, we believe it is important to be dynamic as markets can reprice quickly and opportunities to add quality growth to portfolios may become attractive. For the first time in almost a decade, fixed income may be fighting for a bigger weight in asset allocation given current yields, and we would not be surprised to hear more conversations about rebalancing to fixed income from alternative investments and equities.

Revisiting 2022: What We Got Right in Our Outlook

Our current Q4 report seems an appropriate time to revisit our Q4 2021 Quarterly Statement to assess what we got right about 2022. How would we grade ourselves? Overall, a B+. While we anticipated markets would likely see more volatility driven in part by central bank tightening, and therefore preferred companies with good earnings rather than good stories, we underestimated the pace at which central banks moved. Within our areas of investment ideas, our concerns of U.S. large cap market concentration and U.S. small cap exposure to negative earnings in their respective passive indices (S&P 500 and Russell 2000) was warranted. We also expected a more volatile market, although how that volatility manifested itself through more above-average daily moves versus more distinct periods of excess volatility was different than we anticipated.

Forecast: We anticipate the positive economic momentum coming out of 2021’s stellar year of economic growth to ripple into 2022 in U.S. markets.

Result: The broader equity market entered a bear market in 2022. Higher implied market volatility coming into 2022 suggested the probability of hitting a bear market above longer-term averages, but we cannot claim to have predicted the U.S. equity markets would enter a bear market in 2022. However, using earnings as a measure of the economy, the positive economic momentum continued through 2022. According to FactSet, 2022 U.S. estimates are expected to show growth of 5%.1

Forecast: Key risks to the markets remain missteps by the Fed as it enters a quantitative tightening phase following an incredibly supportive environment in recent years.

Result: We did not have specific expectations for monetary tightening, but even after the fact we admit we did not see a high probability of the Fed raising rates by a cumulative 4.25% in 2022, the most in over 40 years. Our probability was low for that magnitude of rate hikes — not because we did not think market conditions warranted the raises, but the past decade of Fed behavior almost always erred more dovish, even when taking a more hawkish stance could be argued. While both equity and fixed income markets finished in negative territory and the 60/40 portfolio saw its worst return since 2008, we would argue the market underestimated how hawkish the Fed would pivot rather than labeling it a misstep (for the moment).

Forecast: Overall, the economic backdrop looks positive for U.S. stocks, but the shift from a supportive fiscal and monetary environment will likely be met with some market volatility.

Result: In retrospect, we should have removed the word “some” from “some market volatility.” Using the Cboe Volatility Index (VIX) as a proxy for market volatility, the VIX had a median closing price of 25.5, the fourth highest since data became available in 1990, with 2008, 2002 and 2020 the three higher years in descending order. The S&P 500 saw the fourth highest +/-2% intraday moves since 1990, with 2008, 2002 and 2009 the three higher years in descending order. Interestingly, the maximum intraday move in 2022 of 5.6% was more in line with the 33-year average of 5.1% versus being in the top four since 1990, like both median VIX and number of +/-2% moves. This suggests the market was oscillating in 2022 with several days of above-average daily moves but no specific period of excessive daily volatility.

Forecast: The continued rotation from investing in a “good story” to investing in “good earnings” will likely continue in both large and small cap stocks, with value likely seeing some strength over growth this year.

In our Q4 2021 Statement, we highlighted three areas of the market where we believed there could be continued opportunity for 2022 — active small cap, active large cap and volatility strategies. Those observations from our Q4 2021 report are in italics below.

We believe small cap stocks entered the correction phase of the negative earners2 outperformance in second-half 2021 and could continue to see relative weakness in these names throughout 2022. Given the concentration of negative earners in the Russell 2000, we continue to believe passive investors could experience notable underperformance during this cycle shift and therefore prefer actively managed strategies focused on higher quality, undervalued companies.

Using the longest available history for which we have usable data for the Russell 2000 (since December 31, 1986), positive earners have experienced almost 3x the annualized return with less than two-thirds the risk (annualized return for positive earners of 9.4% vs. negative earners with 3.2% and standard deviation of 19.6% vs. 33.4%, respectively). Admittedly, a significant portion of this longer-term outperformance is the avoidance of large drawdowns following market bubble bursts like the internet bubble in the early 2000s, the global financial crisis of 2008 and the post-COVID growth correction of 2022. Even with the correction of the most recent outperformance period of negative earners, we still believe investing in positive-earning companies over negative-earning companies is a more prudent focus for long-term investing. We continue to prefer actively managed strategies focused on higher quality, undervalued companies to a passive allocation in small cap because of the above-average weight relative to longer-term weighting in the Russell 2000 to negative earners.

As seen in Exhibit 2 (left chart), the top five weights in the S&P 500 (Apple, Microsoft, Amazon, Alphabet and Tesla) accounted for 18.8% of the index as of year-end 2022, down from 23.0% at year-end 2021 and 21.8% at year-end 2020. An all-time high of 23.9% was reached in August 2020, implying markets may have seen peak concentration, which we did not forecast heading into 2022. Concentration of this magnitude (top five components with a weighting greater than 14% in the S&P 500) is rare, so we continue to believe the dot-com period (June 1999-December 2002) may be a reasonable proxy for how the index and the top five weighted stocks performed historically. Coincidentally, peak concentration level during the dot-com era was 18.8% in March 2020, in line with current levels.

Unlike the dot-com period, where the most concentrated stocks gave back the overperformance over the next nine months and eventually underperformed by over 22% in the 26 months after the peak (not annualized), this cycle’s outperformance of the top five weights has been much stickier, although we started to see some correction in 2022. Specifically, the top five weights underperformed the average stock by over 31% but have not closed the gap of the longer period’s outperformance. As of year-end 2022, these top five weights still had an outperformance of 7.4% (not annualized) relative to the average stock in the S&P 500, but well off the two monthly highs seen in August 2020 (47.2%) and November 2021 (43.4%).

Using the dot-com as a rhyme to history, we continue to believe the top five weighted stocks could experience underperformance relative to the average stock. With the continued S&P 500 concentration risk, more normalization of the current five largest weighted stocks could create underperformance for passive strategies allocated to these stocks. We continue to prefer active strategies with lower concentrations in these mega caps or large cap allocations that are more diversified versus strategies with higher exposures to these five largest companies. 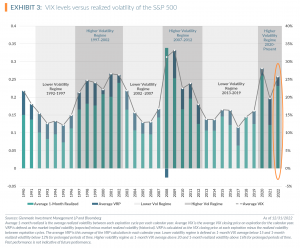 All data is as of 12/31/2022 unless otherwise noted. Opinions represent those of Glenmede Investment Management LP (GIM) as of the date of this report and are for general informational purposes only. This document is intended for sophisticated, institutional investors only and is not intended to predict or guarantee the future performance of any individual security, market sector or the markets generally. GIM’s opinions may change at any time without notice to you.

Any opinions, expectations or projections expressed herein are based on information available at the time of publication and may change thereafter, and actual future developments or outcomes (including performance) may differ materially from any opinions, expectations or projections expressed herein due to various risks and uncertainties. Information obtained from third parties, including any source identified herein, is assumed to be reliable, but accuracy cannot be assured. This paper represents the view of its authors as of the date it was produced, and may change without notice. There can be no assurance that the same factors would result in the same decisions being made in the future. In addition, the views are not intended as a recommendation of any security, sector or product. Returns reported represent past performance and are not indicative of future results. Actual performance may be lower or higher than the performance set forth above