Inflation, the Federal Reserve (Fed) taper and tightening timeline and COVID-19 variants were the dominant themes of the quarter. The U.S. consumer price index report for November was headlined by a 6.8% year-over-year inflation print, the highest annualized increase since June 1982. The Fed removed the word “transitory” from its inflation commentary, announcing a more aggressive taper timeline and more hawkish dot plot. Market expectations are for three to four rate hikes in 2022, potentially as early as March. While the delta variant was of some concern to the markets early in the quarter, the continued increase in vaccination and booster rates kept investor expectations positive. The World Health Organization announcement in November about the omicron variant generated some initial market volatility, but it was short lived when additional studies suggested the variant resulted in less severe cases.

We anticipate the positive economic momentum coming out of 2021’s stellar year of economic growth to ripple into 2022 in U.S. markets. Market concentration, particularly in large caps, likely remains a risk and could be more detrimental to passive products. The continued rotation from investing in a “good story” to investing in “good earnings” will likely continue in both large and small cap stocks, with value likely seeing some strength over growth this year. Key risks to the markets remain missteps by the Fed as it enters a quantitative tightening phase following an incredibly supportive environment in recent years. COVID-19 will likely remain in the headlines, but any new variants that shift this view substantially will likely be met with increased market volatility as the fiscal and monetary support potential will be in question. Overall, the economic backdrop looks positive for U.S. stocks, but the shift from a supportive fiscal and monetary environment will likely be met with some market volatility.

Following are three areas of the market that caught our attention in 2021, and where we believe there may be continued opportunity for 2022 — active small cap, active large cap and volatility strategies. 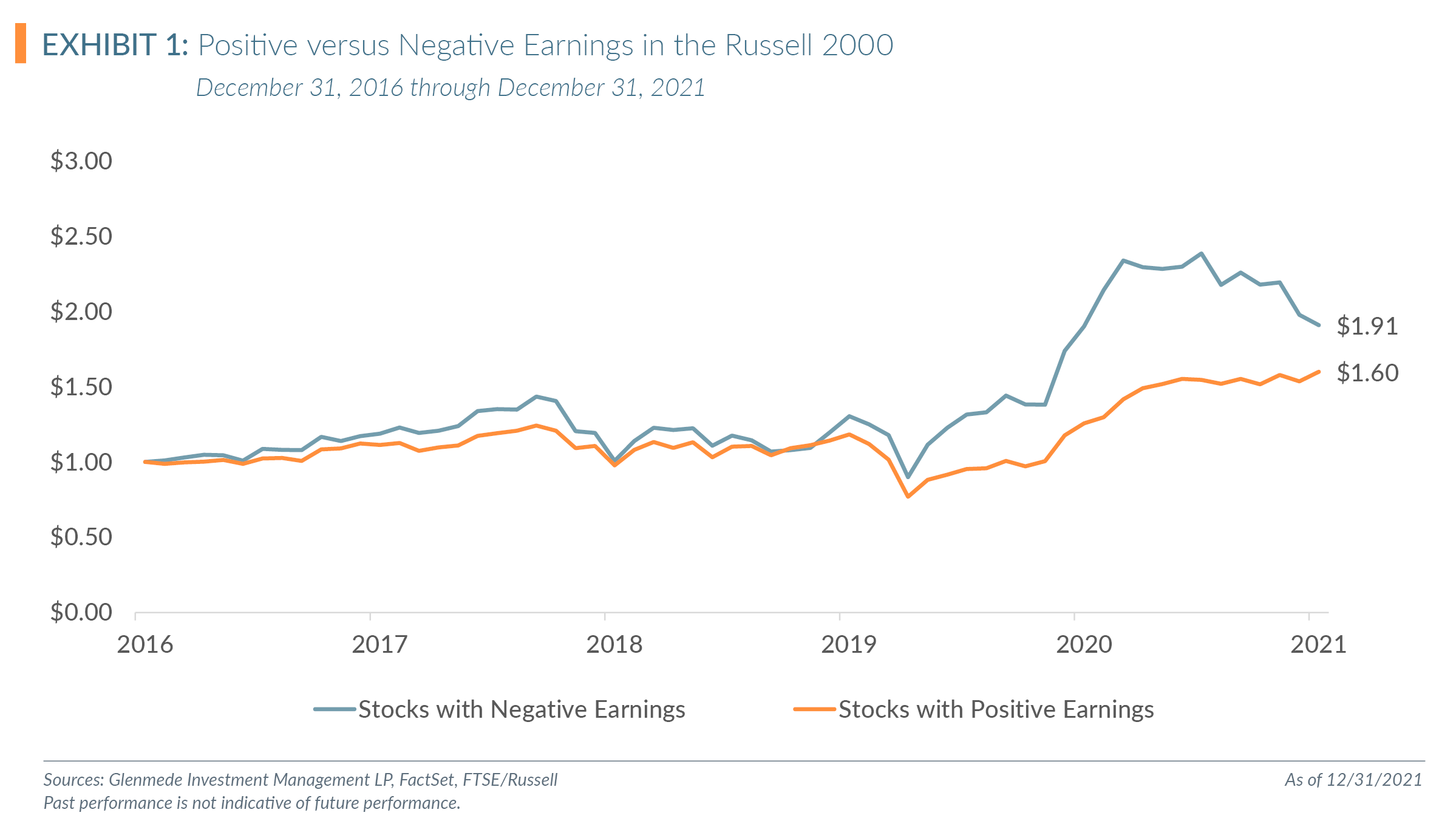 Over the past 35 years, the small cap universe has had cyclical periods of negative earners outperforming positive earners. We define a negative earner as any company without earnings over the trailing 12 months. With the unprecedented monetary and fiscal support over the past few years, the Russell 2000 index component stocks have been in one of those cycles, with negative outperforming positive earnings. As of year-end 2021, ~35% of the Russell 2000 comprised negative earners, slightly off the all-time high of ~38% earlier in the year and well above the average of ~19.5% since August 1993 when sector data became available.

Historically, investing in positive-earning companies has proved more profitable than investing in negative-earning companies. Using the longest available history for which we have usable data for the Russell 2000 index (since December 31, 1986), positive earners have experienced almost 2.5x the annualized return with less than two-thirds the risk (annualized return for positive earners of 10.6% versus negative earners with 4.4% and standard deviation since of 19.4% versus 32.9%, respectively). A significant portion of this longer-term outperformance of positive earners is the avoidance of large drawdowns following market bubble bursts, like the internet bubble in the early 2000s and the global financial crisis in 2008.

We believe small cap stocks entered the correction phase of the negative earners’ outperformance in second-half 2021 and could continue to see relative weakness in these names throughout 2022. Given the concentration of negative earners in the Russell 2000, we continue to believe passive investors could experience notable underperformance during this cycle shift and therefore prefer actively managed strategies focused on higher quality, undervalued companies. 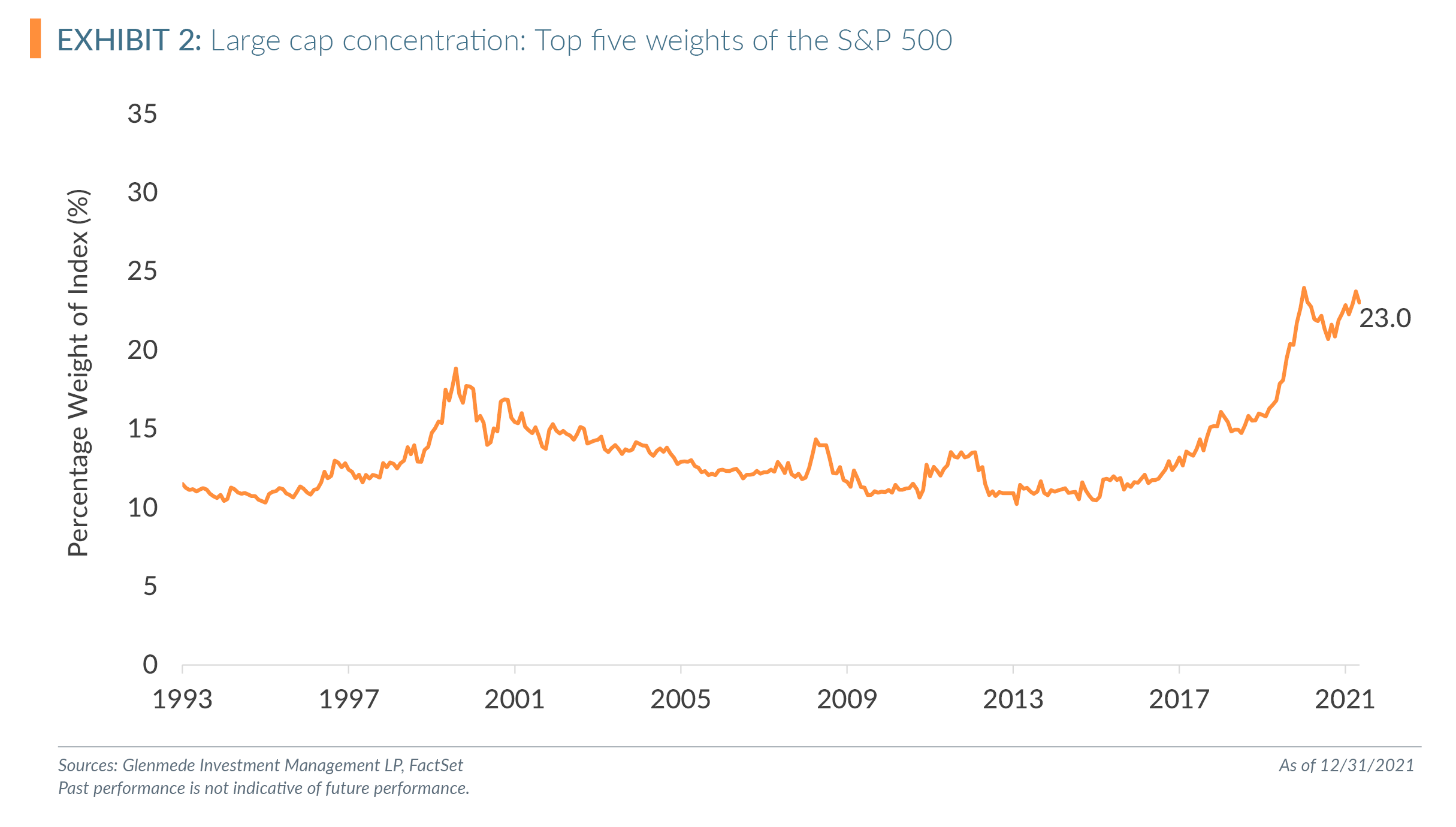 Over the past few years, there has been an increased concentration of a handful of names within the large cap indexes, with 2021 experiencing another increase from the prior year end. As seen in Exhibit 2, the top five weights in the S&P 500 (Apple, Microsoft, Amazon, Alphabet and Tesla) accounted for 23.0% of the index as of year-end 2021, up from 21.8% at year-end 2020. An all-time peak level of 23.9% was reached in August 2020, but in fourth-quarter 2021 that level was challenged, sitting at 23.7% at the end of November 2021.

A difference in the current environment versus the 2000s has been the substantial adoption of passive investment vehicles. As of November 2021, of the $26.9 trillion in managed U.S. funds, nearly 45% of these funds were passively managed (according to data collected by Bloomberg), and that number has been growing over the past 20 years. Of the passively managed strategies, about 44% have a large cap fund objective (according to Bloomberg data). While not all of these strategies may be indexed to the S&P 500, a reasonable assumption is that more money is invested in passive large cap strategies indexed to the S&P 500 than in the prior peak concentration in 2000. If this outperformance of the current five largest weighted stocks were to normalize, this could create an opportunity for outperformance by active funds with lower concentrations in these mega caps or large cap allocations that are more diversified versus strategies with high exposures to these five largest companies. 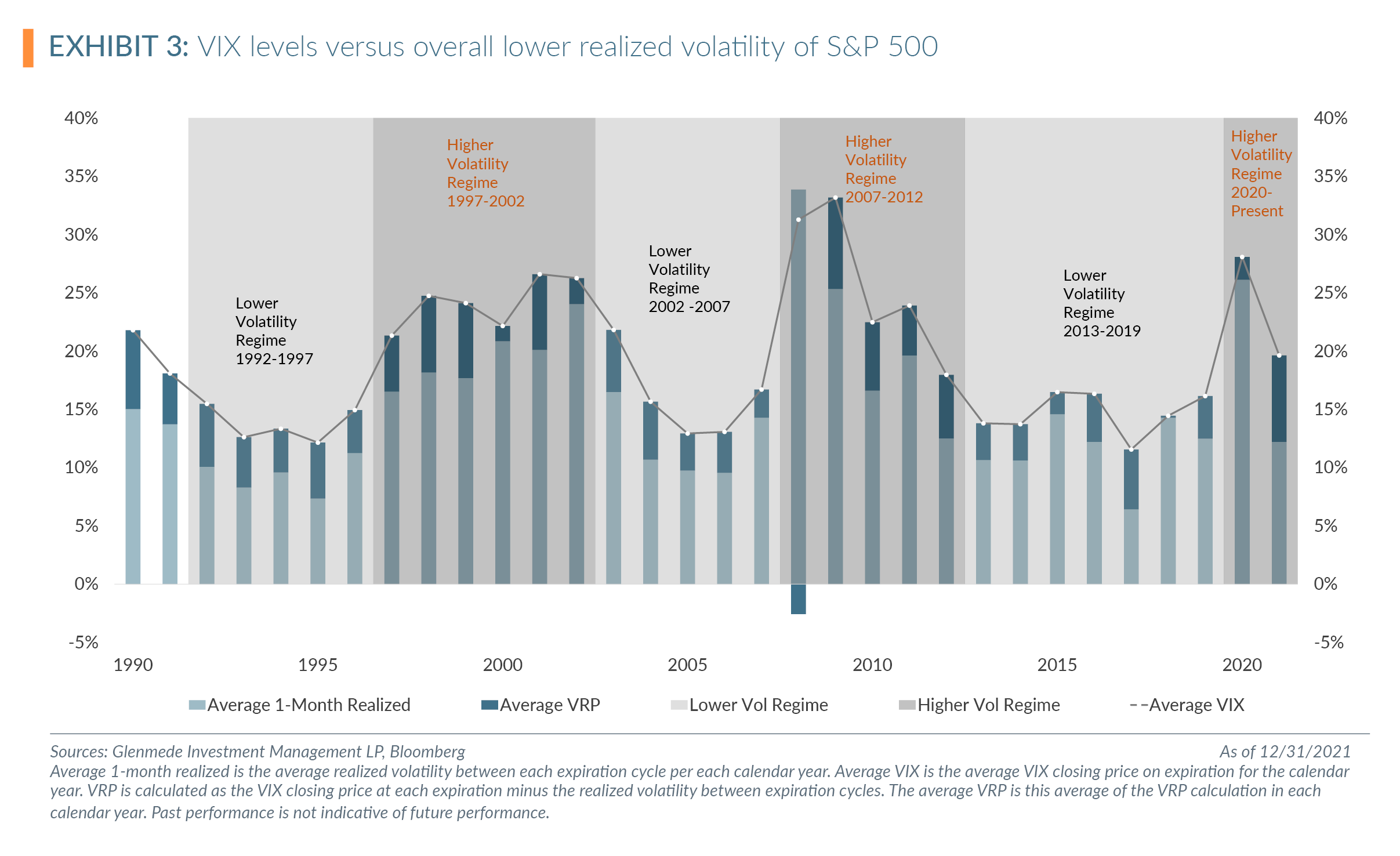 In oversimplified terms, implied market volatility tends to be driven by three factors: recent realized volatility, expectations for volatility around upcoming known events and the ever-present volatility of the “unknown.” Following a volatile year for markets in 2020, market-implied volatility for the S&P 500 as measured by the Cboe Volatility Index (VIX) remained elevated for much of 2021, with an average closing VIX price of 19.7 and a range of 15.0-37.2 (compared to the 31-year average closing VIX price of 19.5 and a range of 9.1-82.7). The average 1-month S&P 500 index realized volatility for 2021 was notably lower at 12.3% versus 2020’s level of 26.1% and the 31-year average of 15.0%, suggesting much of the elevated implied volatility for 2021 was driven by events both known and unknown rather than continued realized volatility experienced in 2020. Simply put, investor concerns were the driver of higher implied volatility instead of actual market volatility. Likely drivers of the increased implied volatility were the uncertainty of the Fed’s path, the dysfunction in Washington with both fiscal stimulus and the debt ceiling, ongoing concerns surrounding COVID-19, the impacts of higher inflation and the fears of potential economic slowdown driven by supply chain constraints.

Unlike 2020, when exposure to long volatility tended to be profitable, short volatility strategies likely had the more profitable outcomes for 2021 when measuring exposure through the volatility risk premium (VRP). VRP, defined as the market implied volatility (expected) minus market realized volatility (historical), is a risk premium that tends to be missing from most asset allocations. Exhibit 3 shows the increased levels of the VIX versus the overall lower realized volatility of the S&P 500, which resulted in VRP experiencing its second highest level in 31 years of 7.4%, behind 2009’s record of 7.8% and the 31-year average of 4.1%.

All data is as of 12/31/2021 unless otherwise noted. Opinions represent those of Glenmede Investment Management LP (GIM) as of the date of this report and are for general informational purposes only. This document is intended for sophisticated, institutional investors only and is not intended to predict or guarantee the future performance of any individual security, market sector or the markets generally. GIM’s opinions may change at any time without notice to you.